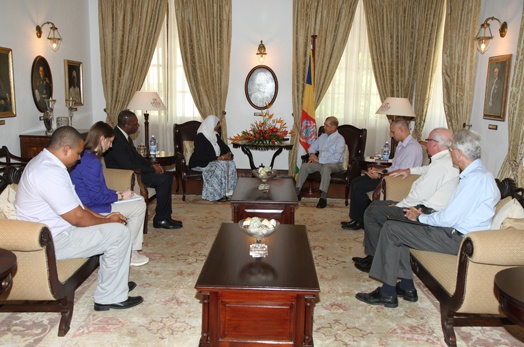 President James Michel met with two delegations this morning, from the World Trade Organisation and also from the International Monetary Fund.

During his meeting with the Chairperson of the Working Party of the Accession of Seychelles to the WTO, Ms. Hilda Al Hinai,President Michel thanked the WTO for the invaluable support in technical assistance for the Seychelles’ accession process.

Mr. Michel added that Seychelles will continue to count on the WTO for support in capacity-building as Small Island Developing State looking towards developing the Blue Economy, as well as the technical assistance in the post-accession period.

Ms Al Hinai thanked President Michel for his leadership, guidance and wisdom during the reform process for the Seychelles’ accession and expressed confidence in the WTO’s continued assistance to the country.

Later in the afternoon, the Seychelles National Assembly ratified the agreement for the Seychelles’ accession to the World Trade Organisation.

Ms Al Hinai is also the Deputy Permanent Representative to the Permanent Mission of the Sultanate of Oman to the United Nations Office in Geneva.

Present at the meeting were the Minister for Finance, Trade and The Blue Economy, Mr. Jean-Paul Adam, the Seychelles chief negotiator for the WTO accession, Mr. Charles Morin, and the President’s Diplomatic Adviser, Ambassador Callixte d’Offay, the WTO Director of the Accessions Division, Mr. Cheidu Osakwe and the Legal Affairs Officer of the Accessions Division, Ms. Petra Beslać.

During his meeting with the IMF Chief of Mission for Seychelles, Mr. Marshall Mills, President Michel thanked the IMF for its continued support to Seychelles in sustaining a stable macroeconomic programme.

Mr. Michel said that it is important to maintain fiscal discipline and at the same time ensure the growth of the economy.

Mr. Mills underlined the improved resilience of the Seychelles economy and stated that the IMF was encouraged that the policy decisions taken by the Seychelles Government in 2014 and early 2015 had helped to stabilise pressures on the exchange rate coupled with a favourable reduction in international fuel and commodity prices.

The Government and the IMF have also discussed ways to reinforce the management of State Owned enterprises.

Mr. Mills is also the Deputy Division Chief of the African Department of the IMF.