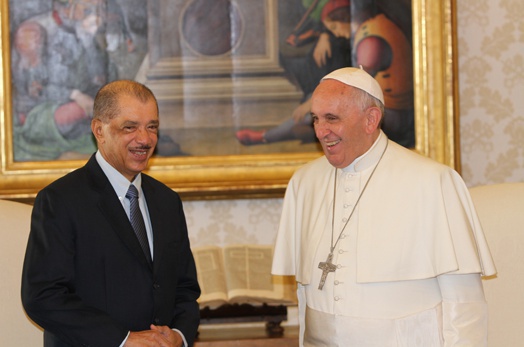 At the start of the meeting which the President of the Republic of Seychelles, Mr. James Alix Michel, had with His Holiness the Pope during his official visit to the Vatican, the President conveyed to His Holiness, with much joy and emotion, a message of peace and prayers on behalf of the people of Seychelles.

He indicated that the entire Seychellois nation was in total communion with him and the whole Catholic Church. President Michel and Pope Francis welcomed the long-lasting, special and privileged nature of the relationship between the Holy See and Seychelles, emphasising that these relations were rooted in faith and spirituality.

At the same time, they reiterated their engagement to nourish and strengthen these bonds.These Christian values, President Michel added, were the most important elements which united the people of Seychelles as a nation, and which gave full meaning to human dignity and which permitted the development of the country in peace and unity.

Pope Francis emphasised that peace and unity were indispensable assets which must at all costs be preserved, lived and grown constantly.The Pope encouraged President Michel to continue working with the Church in Seychelles to consolidate and strengthen the gains of the development of the country with stability and progress.

In this regard, President Michel thanked the Church for its contribution to the well-being of the people of Seychelles through its spiritual works, education and social services.The Pope was very attentive to the mutual collaboration between the Catholic Church and the State in promoting the family and the development of the potential of the youth, particularly in the context of the implementation of the Program of Social Renaissance to find lasting solutions to the social challenges afflicting the Seychellois society.Families and youth in particular had an indispensable role to play in the renewal of society, said the Pope.

The President hailed the foresightedness and the vision of the Pope on major current affairs, his engagement to the service of peace and development, and to harmony and understanding between peoples.  In this context, the President underlined the importance of dialogue across cultures and religions, as advocated by the Pope.

He also paid tribute to the initiatives of the Pope aimed at ensuring the success of the important Conference on Climate Change which is scheduled to take place in Paris towards the end of the year. He said he was confident that these initiatives, which included the forthcoming publication of an encyclical on Human Ecology, during the Pope's intervention at the UN General Assembly in September this year, and the convocation of religious leaders, would have a decisive and positive influence on these negotiations.

The Pope congratulated President Michel for his determined leadership in these critical matters, in collaboration with other insular states, to combat the impacts of climate change.The Pope stressed that "creation is a marvelous gift of God, and we should take care of it and use it with much respect and gratitude for the benefit of all."

In addition, President Michel shared the Pope's engagement in the struggle against the growing poverty and inequality in the world. He supported the call to put people and their well-being at the centre of economic and political life.

"We are conscious that the progress of a nation is not measured simply by economic indicators.  Our ambition in Seychelles is to build a prosperous country with a high standard of life, consistent with our cultural and spiritual values," highlighted President Michel.

The President asserted that in this world which remained imperfect, with a need to rethink and rebuild, especially in the context of emerging new challenges, the words of the Pope were a source of inspiration and wisdom, which would make the world more fraternal, caring and responsible.

At the end of the meeting, Pope Francis gave his blessings for Seychelles, for the people of Seychelles, and for President Michel and the government he led, and for his family, saying that he kept them in his prayers, in faith and communion.

On the same occasion, he addressed his wishes of peace for the entire Seychellois nation in building its future founded on spiritual and human values.President Michel invited Pope Francis to visit Seychelles, telling him how happy and honored the people of Seychelles would be to welcome him.  Such a visit by the head of the Catholic Church to Seychelles would also be symbolic of a visit to an Indian Ocean island with African roots.