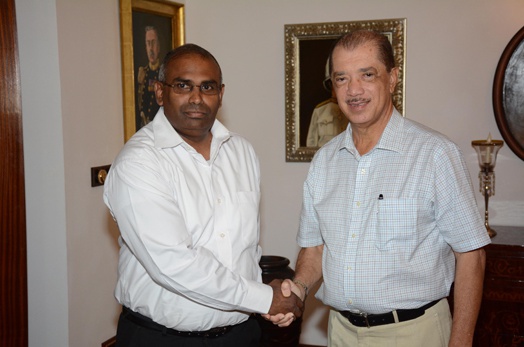 Mr. Shanaka Jayasekara spoke to the President about the achievements of the UNODC in its assistance to Seychelles, including anti-narcotics work, the fight against maritime crime, and capacity building.

President Michel said expressed the gratitude of the Seychelles government for the continuous support of the UNODC in developing capacity-building and ensuring the success of its programmes, particularly in the fight against maritime crime, such as piracy, drus trafficking as well as judicial proceedings.

Mr. Shanaka Jayasekara also thanked the President and for the excellent collaboration between the UNODC office in Seychelles and the Seychelles government, noting that much progress had been made in reforms in the Seychelles police, and that good results had been achieved to reduce crime in the country.

He noted that the UNODC had delivered grant assistance to Seychelles of the value of 5 million US dollars in the last five years and that the organization would continue to support the country in taking the lead role in ensuring regional maritime security.

In an interview with the local media, Mr. Jayasekara said that as he has reached the end of his tenure and with the decline in piracy, UNODC will be looking at other opportunities to engage with Seychelles and noted that they are already working on an anti-drug demand strategy with the government of Seychelles as there is a need to engage in drug demand reduction activity, such as reduction treatment counseling processes and training of counsellors.

“Seychelles took a pivotal role in countering piracy in the Indian Ocean region and President Michel took a lead in stepping up to the plate and becoming a regional prosecution centre. UNODC assisted the government of Seychelles through this process and now we have seen a significant decline in piracy, much to the effort of the President and the people of Seychelles. So we thank him for the role played by Seychelles and for giving UNODC the opportunity to assist in that whole successful process,” said Mr. Jayasekara.

He further stated that Seychelles and the UNODC will be looking at countering drug trafficking on the high seas, as there is large flow of drugs coming from the Makran coast of Pakistan and Iran to the East African coast that passes near the Seychelles economic zone.

Also present at the meeting was the Minister for Home Affairs, Mr. Charles Bastienne, the President’s Diplomatic Advisor, Ambassador Callixte D’Offay and the Chief Press Secretary in the Office of the President, Ms. Srdjana Janosevic.