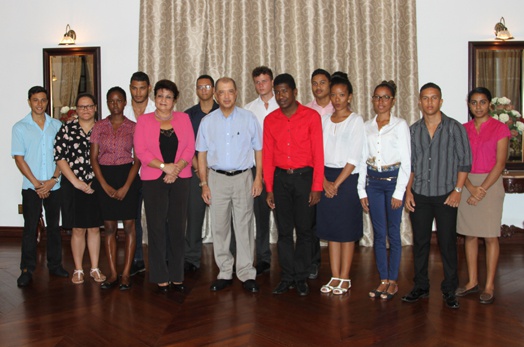 President James Michel received twelve A level students at State House this morning who are the best performers of the 2015 graduation year. All of them have gained at top grades in their examinations at the state-owned School of Advanced level Studies (SALS) and privately-owned Independent School.

A total of 14 Seychellois students in the two schools achieved at least 3 A grades in their A level results, with some achieving even 4 A’s and A*'s. Together they are a group of one of the best performing students of the country’s academic records achieved in the last ten years.

"I am very proud of you, I believe in you, in the youth, as you are the future of our country. You must never allow anyone to steal your dreams… you must dream big and be determined to be attentive to your studies and gain the knowledge and skills so that you can contribute to the development of your country and be what you want to be. Make your parents, your friends and your country proud. I congratulate you for what you have achieved and hope that you will take the opportunity you have before you; to become professionals and to come back to share your knowledge as your country needs you,” said President Michel to the students in their meeting.

The students spoke to the President about their plans for their studies and their careers. They asked him questions about his youth, dreams and career, and he told them about his challenging path and the lack of education in Seychelles at the time. He said that his tough experiences as a child from a poor family who did not have access to higher education had inspired him to ensure that all Seychellois children should get a chance to have a good education, and that his time as a Minister for Education was spent working to democratise education and make it free for all children.

He said it also inspired him to create the University of Seychelles, so that future generations would not go through the experiences he had, but instead had the chance to develop themselves to their full potential.

Later this year the A level graduates will be leaving the country to further their studies at overseas universities on government scholarships in areas such as Law, Psychology, Aviation, Medicine, Physics, Economics, Business Management, Engineering, and Petroleum Engineering. One student is pursuing her studies independently.

Speaking to the local media after the meeting, they spoke about their meeting with the President.

Nissa Payet told them will be studying to become a lawyer, and said that she plans to do a Masters degree under the Seychelles Young Leaders Programme afterwards. When she returns to Seychelles she will consider going into politics and becoming the Seychelles’ first female president.

Another student, Mariana Eulentin said that she will be studying to become a criminal psychologist and plans to work with the Seychelles Police, especially with cases concerning people who are victims of violence.

Jean-Luc Adrienne told the media that he wants to become a lawyer. He said his studies were not easy but that with determination it was possible, especially as he knew how to balance his studies and his time and he knew his priorities.

Also present during the meeting was the Minister for Education, Mrs. Macsuzy Mondon.

Hamath Dorby (absent during the meeting)

Nicholas Adam (absent during the meeting)