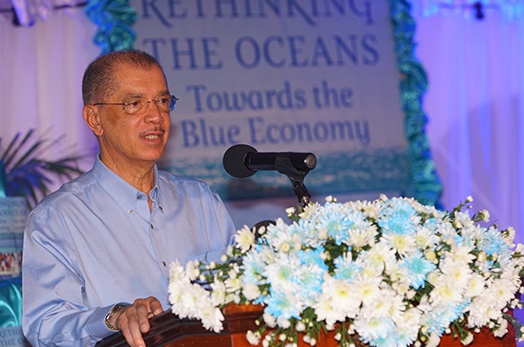 On the occasion of World Oceans Day, President James Michel has launched his fourth book, entitled ‘Rethinking The Oceans - Towards the Blue Economy,’ during an evening reception at State House today.

During his address, President Michel said that under the proud flag of Seychelles, he has taken every opportunity to turn the world’s attention to this new frontier and has addressed world leaders on every continent and many international organisations on this subject, calling for a new partnership with the oceans instead of depleting their resources.

“The Blue Economy represents a new frontier. A new frontier in mankind’s endeavours not to ignore the land but to take a fresh look at the sea.  And not to exploit its immense reserves as if there were no tomorrow, but to manage them sustainably.  We have over a longer period become familiar with the idea of the Green Economy; now it is the turn of the Blue Economy as well,” he said.

“It is no coincidence that I have dedicated the book to all of our children, to those who will inherit the oceans. For they are the sentinels of nature and the guardians of our oceans. In telling this story, I have been inspired by fellow Seychellois.  Fishermen who daily sail beyond the horizon, away from the safety of the shore.  Conservationists who devote themselves to protecting the marine environment, for us all to enjoy.  Our brave sailors who, alone, faced the menace of piracy before international help arrived. I have discussed with many other people and I have learnt a lot from their own experiences. I have learnt a lot listening to people from other small island states, from scientists, business leaders.”

During the launch ceremony, the Seychelles’ founding President Sir James R. Mancham, KBE, endorsed President Michel’s book with the following words – “President Michel has been at the forefront of the Blue Economy concept since the subject started making headline news, and this book therefore should be read by anyone seriously interested in the future of the oceans.”

“No doubt, President Michel has achieved tremendously, since he assumed the Presidency of Seychelles….against a background of good leadership and great navigation. In this special time in the history of Seychelles, we should not forget who we are and where we came from,” he said.

Sir James Mancham is an active supporter of the World Ocean Council as well as an Ambassador-at-Large of the Ocean Exchange which is based in Savannah, Georgia, USA.

Dr. Anderson said “President Michel’s book is refreshing to read because  it is a mature reflection on complex issues and seeks policies and solutions which are good for both human beings and the oceans….Seychelles has been pioneering the creation of the Blue Economy and can show the way for other countries to follow.”

“Today, through the launching of this book, the President shows us yet again his commitment to implement a transformative vision for Seychelles. An insightful book which will offer food for thought for those of us who appreciate the ocean, and for those of us who not only want to protect it, but also wish to see it contribute even more towards our socio-economic development,” added the Minister for Finance, Trade and the Blue Economy, Mr. Jean-Paul Adam, in his address.

In his foreword for the book, the Director-General of the Food and Agriculture Organisation (FAO) of the United Nations, Mr. José Graziano da Silva, said “At such a challenging time, it is essential to have a leader who clearly understands both the changes required to protect our environmental legacy, and the need to build, in parallel, an inclusive society that creates economic growth and security for its citizens in a sustainable way... Seychelles was one of the first countries to recognise that caring for the oceans opens doors to opportunities for the growth of coastal communities and, particularly, Small Island Developing States devoid of extensive land. But the country also understood that any such growth requires a clear commitment to sustainability. This is one of the core messages President Michel and his team have championed since 2012.”

Prior to the reception, an exhibition prepared by a wide range of Blue Economy stakeholders was on display in the State House and its garden.

The launch event was attended by Vice-President Danny Faure, a great number of dignitaries, people working in various sectors of the Blue Economy as well as friends and family of the President.

The 200 page book will be on sale in Seychelles and internationally.