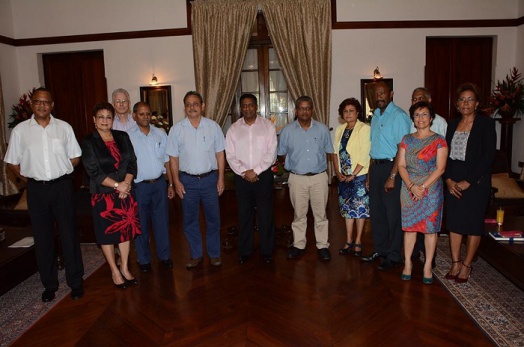 The discussions were held in the spirit of promoting dialogue on matters of mutual concern, and to achieving understanding of the views of both sides on issues relating to our democracy with a view to working together to promote the best interests of the Seychellois people.

An important issue of concern was the need to review the provisions of the Constitution under which the Vice-President assumes the Presidency upon the resignation of the serving President.  It was agreed that this constitutional provision will be amended so that there will be no more transfer of power in similar circumstances as we have seen in the past instances. The two sides agreed that the necessary Constitutional amendment should be undertaken by March next year. The text of such an amendment, as well as its implications for the timing of a future Presidential election, would be the subject of discussions at future meetings.

The two sides agreed that the SBC Act should be amended to guarantee the independence of the institution, including the manner in which Board members are appointed. Similarly, the Seychelles Nation newspaper should exercise greater independence and impartiality so as to achieve fairer coverage of diverse views in broadcasts and publications respectively.

Legislation governing the Seychelles Media Commission should also be reviewed to strengthen it and make it more effective.

It was agreed that the structure and composition of the Electoral Commission would be reviewed and amended as necessary to enable it to operate with greater efficiency, transparency and good governance. This will include separating the functions of the Chairman and CEO.

The need for review of other Commissions, such as the Human Rights Commission, the Ombudsman’s Office and similar institutions, to ensure that they fulfill their mandate in serving the people of Seychelles, was accepted.

The need to review the composition of the Constitutional Appointments Authority to reflect the changed political landscape of the country was also raised.

The need for effective delinking of state institutions and political parties was also highlighted and this was noted as an issue which will be taken up in greater detail in future meetings.

It was agreed that amendments to the Constitution and relevant legislation required for the various measures would be undertaken by March 2017 to address the issues of concern.

Further meetings between the President and the LDS would be held regularly in the spirit of promoting dialogue, unity and national reconciliation.

The President said that he would also be meeting the Speaker of the National Assembly and the two Leaders of the House at regular intervals.