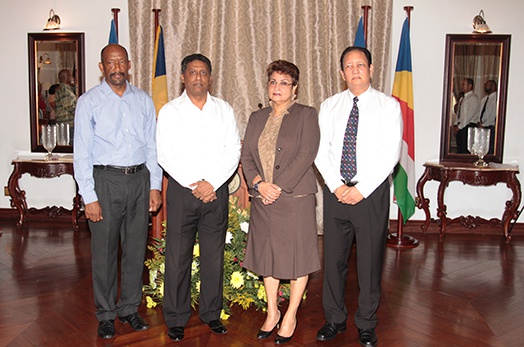 The new Vice-President of the Republic of Seychelles, Mr. Vincent Meriton, Designated Minister, Mrs. Macsuzy Mondon and Minister, Dr. Peter Larose, were sworn into office during a ceremony held at State House this morning before President Danny Faure.

Also present at the auspicious ceremony was the Speaker of the National Assembly, Mr. Patrick Pillay, the Chief Justice of the Supreme Court, Mrs. Mathilda Twomey, President of the Court of Appeal, Justice Francis MacGregor, Attorney General, Mr. Ronny Govinden and other distinguished guests including members of their families and senior officials in the Office of the President.

“There is a lot of work to be done, a lot of challenges to be faced and we need a teamwork approach to be able to address the issues. We must always have the Seychellois people at the center of development, not only as beneficiaries but as participants in the process. I think this is what we should focus on; it is the government’s responsibility to facilitate development with the support of the private sector and that of the civil society platform. We have to bear in mind that no man is an island and we have to work in consultation with one another so that we can achieve the plans set forth by President Faure,” said Vice-President Meriton following the swearing-in ceremony.

During the ceremony, Designated Minister Macsuzy Mondon and Minister Larose also took the Oath of Allegiance to the Constitution, the Oath of Office and the Oath of Secrecy.

Minister Peter Larose who has now joined the Cabinet of Ministers was before his nomination, the Chairman of the Group Eleven (G11+ 2) of Executive Directors of the World Bank Group. He holds a PhD in UK Commercial Banking and has had a prominent career in finance whereby he has worked in the Ministry of Finance and the Central Bank of Seychelles. In 2008, Dr Larose became the Advisor to the Executive Director of the Africa Group 1 Constituency with the World Bank, and has since occupied senior posts with this organisation.