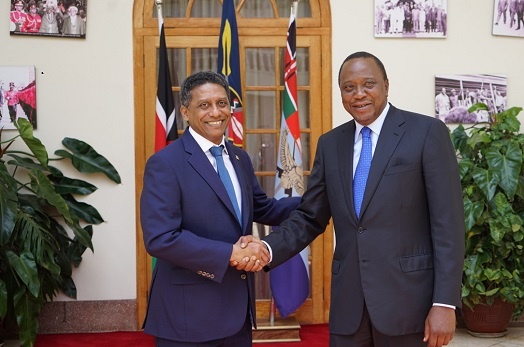 Seychelles and Kenya are set to strengthen regional partnership and cooperation in mutually important areas such as the fight against narcotics, tourism, trade, maritime security and the Blue Economy.

President Danny Faure and the President of the Republic of Kenya, H.E. President Uhuru Kenyatta, identified and agreed on the priority areas in which to deepen cooperation during bilateral talks held at State House, Nairobi, this morning.

President Faure is currently on his first State visit since he took office in October 2016, following the invitation of President Kenyatta.

The two leaders, in the presence of their country delegates, also agreed on other areas of possible exchange such as human capital and technical cooperation, recognizing them as opportunities to further consolidate the longstanding partnership between the two Governments and peoples.

“Our presence here in Kenya has already ushered in a new era of dynamism in our bilateral ties, and it is my fervent hope that this year will represent a new chapter as we forge ahead in our common efforts to further consolidate the friendly relationship that Kenya and Seychelles have shared for years,” said President Faure.

President Faure expressed Seychelles’ interest in increasing the trade of agriculture, horticulture, and meat products from a neighboring country like Kenya instead of Brazil, in the Seychelles Government’s efforts to continuously lower the cost of living for its people.

Improving air connectivity with increased frequency of flights by Kenya Airways to Seychelles, a joint tourism marketing strategy to boost promotion of the two nations’ tourism products of safari tourism and beach destination respectively, and technical consultancy in fisheries and security for Kenya’s Exclusive Economic Zone, were also crucial areas on the cooperation agenda between Seychelles and Kenya.

On his part President Kenyatta expressed his appreciation to Seychelles for the significant role being played as a strategic partner in the fight against drug trafficking, terrorism, and anti-piracy and pledged his full support in further enhancing cooperation in the discussed areas.

“We both share determination and intention to ensure that we do everything possible to deepen regional trade investment and develop regional economic growth by working together,” said President Kenyatta.

During the talks, President Faure reiterated the strong interest and unwavering commitment of the Government of Seychelles to further develop relations and cooperation with Kenya. He thanked President Kenyatta for the warm welcome extended to him and his delegation and conveyed a formal invitation for the Kenyan Head of State to pay a visit to the Seychelles shores.

Following the fruitful bilateral talks, the two Presidents attended a joint press conference where they answered questions from both Kenyan and Seychelles media.

President Faure and his delegation also attended a State Luncheon at State House hosted by President Kenyatta and the First Lady of the Republic of Kenya, Her Excellency Margaret Kenyatta.

The First Head of State to visit Kenya was President France Albert Rene in July 1990. President Danny Faure is now the second Head of State from Seychelles to undertake a State Visit to Kenya.