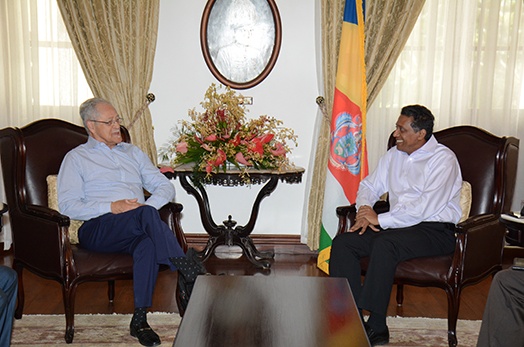 President Danny Faure received Pastor Christian Lodewyk at State House today. Pastor Lodewyk is on an official visit in Seychelles as an international guest speaker to the National Symposium on Truth, Reconciliation and National Unity held on Sunday 7 May 2017.

The President welcomed Pastor Lodewyk and thanked him for his contribution to the forum as well as sharing his expertise which has involved working with international commissions of truth and reconciliation in countries like South Africa and Rwanda.

"Across the political spectrum here in Seychelles, I think that there is a consensus that the time is right for the country. We are ready to initiate this process as there is a political maturity and readiness on the parts of leaders. However, we need external and credible voices, people that know the process, who can talk about it and guide us through this transition," said President Faure.

During the meeting, President Faure and Pastor Lodewyk discussed the symposium at length, where Pastor Lodewyk took the opportunity to congratulate everyone involved in forming the committee. Pastor Lodewyk also briefed the President on meetings he has had with various organisations including SPDF, the Police Department, Home Affairs, and SIFCO.

President Faure underlined that the Government will wait for the outcome from the Seychelles National Assembly and support the process in developing a framework on national reconciliation.

"I am prepared at Government level to facilitate this process, once the proper structures are created, and for us to have external partners coming here for guidance. This will include you and perhaps others, to work with a structure of state that will be responsible for the execution, and explain and share what you know and have achieved," he continued.

Following the meeting with the President, Pastor Lodewyk also met Vice-President Vincent Meriton. Speaking to the national media after his meetings, he said that it has been a privilege for him to have been able to meet with different officials in the country. He said that he has learnt a lot about the situation in Seychelles and that he is encouraged by what he has seen so far.

"The meetings I have had at different levels have been helpful for me to better understand the local context. I have been able to share some of the stories of how we have managed to go about the process in my country. I am very encouraged by the open conversation that the authorities and politicians had with the people on Sunday evening. This shows that the people were given a platform to speak, and when you allow them to speak, they feel a satisfaction that they are being heard. There will be more opportunities like that," said Pastor Lodewyk.

Also present at the meeting this morning was the Diplomatic Advisor to the President, Ambassador Callixte D'offay, Leader of Government Business in the National Assembly and Vice-chairperson of the Committee, Hon Charles De Commarmond, and Personal Assistant to the Speaker of the Seychelles National Assembly, Mr Terry Romain.