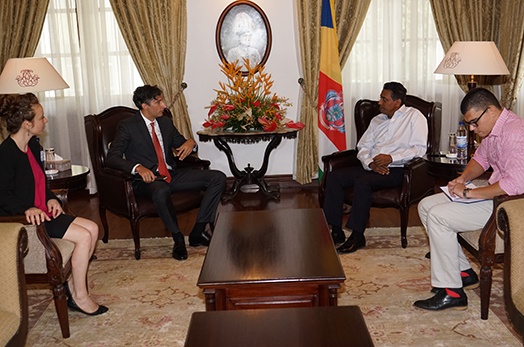 Fitch Ratings Inc. is one of the biggest credit rating agencies in the world. The representatives of the financial agency are currently in the country on their annual visit to review the sovereign rating of the Seychelles and the creditworthiness of the government.

The discussions centered on the new political landscape in Seychelles, its influence on processes such as the Budget, the country's new IMF programme, the present cohabitation between the Executive and Legislative whereby the President expressed the good understanding and communication between the two arms, the importance of inclusive economic growth, and most importantly, the continued ability to place Seychelles as priority in every decision and working together to promote the best interests of the Seychellois people.

At the end of the meeting, President Faure reiterated how important it is to create stability in the country including the economic sector. He underlined the need to build strong institutions to protect and defend the Seychellois people, where everybody is valued, and in creating the space for people to voice out their ideas and to be heard.

Also present at the meeting this morning was the Economic Advisor to the President, Mr Bertrand Belle and the Principal Secretary for the Department of Economic Planning in the Ministry of Finance, Trade, and Economic Planning, Mrs Elizabeth Agathine.

Editor's note:
In 2016, Fitch's credit rating for Seychelles was reported at BB- with stable outlook.