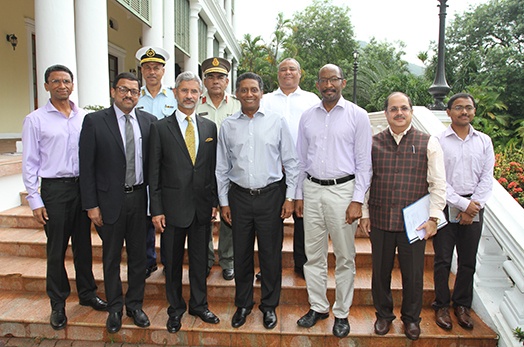 The President of the Republic, Mr Danny Faure, welcomed the Foreign Secretary of India, H.E. Dr Subrahmanyam Jaishankar, for a courtesy visit at State House this morning.

President Faure, on behalf of the government and people of Seychelles, took the opportunity to convey his congratulations to the people and government of India on the occasion of their Republic Day yesterday.

The President expressed his pleasure at welcoming Dr Jaishankar to Seychelles once again, and how the signing of the revised Agreement concerning the development of facilities on Assomption Island serves as a testament of the good relations between Seychelles and India, particularly in the domain of military cooperation.

"It is truly an honour to welcome you once again to our islands, and today we will sign a revised version of the Agreement for the development of facilities on Assomption Island. This project is of utmost importance to Seychelles, and it attests to the kinship and affinity that exists between our two countries. We are proud to have India as a partner in realising our development aspirations,” added President Faure.

President Faure also took the opportunity to discuss with the Foreign Secretary other potential areas of cooperation for new projects in sectors such as Legal Affairs and Law and Enforcement that will further benefit the people of Seychelles.

For his part, the Foreign Secretary of India, Dr Jaishankar, conveyed the personal greetings of the Prime Minister of the Republic India to President Faure and relayed India’s commitment towards enhancing current ties and furthering cooperation based on mutual interests of the two peoples.

Dr Jaishankar was accompanied by an Indian delegation, including the High Commissioner of India to Seychelles, Dr Ausaf Sayeed, Joint Secretary (Indian Ocean Region) in the Ministry of External Affairs of India, Mr Sanjay Panda, and Second Secretary and Head of Chancellory, Mr Ashwin Bhaskaran.

Following the courtesy visit, the delegation proceeded to Maison Queau de Quissy at the Department of Foreign Affairs for further bilateral talks and the signing of the revised agreement.