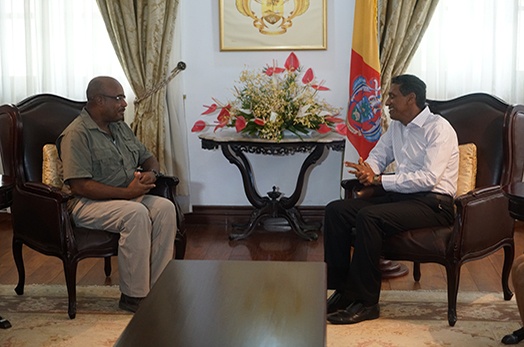 President Danny Faure met Mr Terence Vel at State House today, to personally congratulate him for being the first Seychellois honoured by Her Majesty Queen Elizabeth II as the 39th Commonwealth Point of Light. The award recognises outstanding individual volunteers who are making a change in their community.

Mr Vel is very well known locally for his tireless work in wildlife conservation and with the community- based organisations. He was recognised for the outstanding voluntary work running Wildlife Clubs of Seychelles to provide environmental learning programmes for young people. In the lead-up to the Commonwealth Heads of Government Meeting in London this April, Her Majesty The Queen, as Head of the Commonwealth, is thanking inspirational volunteers across the 53 Commonwealth nations for the difference they are making in their communities and beyond.

“The accolade is a well-deserved recognition of your commitment as an environmental activist, passion and love for nature and wildlife conservation. We are immensely proud of your achievement and on behalf of the people of Seychelles, I wish to thank you for the endless time that you have shared with young Seychellois, empowering them through the Wildlife Clubs of Seychelles as a volunteer. Through that, you have inspired a lot of our school children to learn about the ecosystems, native wildlife, and the environment, which has made some of them today, ambassadors of the environment,” said President Faure.

During the meeting, President Faure and Mr Vel discussed lengthily the voluntary work he has been doing over the years. The President reiterated his commitment and support to the conservation of the environment as well as in encouraging students in wildlife clubs to visit and learn the beauty of the biodiversity of Seychelles. They also spoke about his professional development and capacity building.

Speaking to the local press after his meeting with President, Mr Vel said that he dedicates this Award to every Seychellois citizen who has supported him. He wishes to inspire the students at the University of Seychelles, learning environmental science and encourage them to take a profession in environment conservation.

“It is with great admiration that I accept the Points of Light Award on behalf of every Seychellois citizen, offered to me by Her Majesty The Queen as the Head of the Commonwealth. I am proud to have received this award which encourages me now to continue my volunteer work with Wildlife Clubs of Seychelles and with the community- based organisations with much enthusiasm,” said Mr Vel.

Terence Vel joined the Wildlife Clubs of Seychelles as a leader at Anse Etoile school in 1994 which now have over 800 members.