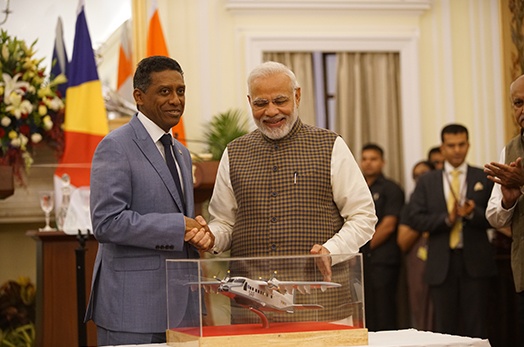 After a tête-a-tête between the two Government leaders, they joined their respective delegations for further discussions on bilateral issues.

Prime Minister Modi announced a list of new programmes to propel our development cooperation to new strategic heights. These programmes include, but are not limited to, the following; small development grant projects which will meet the needs of the communities; grant assistance for a new building complex to house government offices, a new police headquarters and a building for the Attorney General’s Chambers; a new international convention centre to be named after Mahatma Ghandi to celebrate 150 years since the birth of this great leader; a state of the art speciality hospital; the construction of three thousand housing units and the Grand Anse Dam to be financed through a mixture of soft loan and grant assistance; 71 disable-friendly TATA buses to be delivered within the very near future.

President Faure expressed his appreciation to the Indian government for agreeing to all the requests of Seychelles government which underlined the desire of India to accompany Seychelles in its ambition to elevate the social and economic standard of living of its people.

Prime Minister Modi offered a second line of credit for defence and maritime security cooperation for an amount of 100 million US dollars. The Seychelles President in thanking the Indian Prime Minister for this new assistance reflected on how India had been a reliable partner in Seychelles development for the past forty years in a very wide range of fields and noted that defence cooperation had been one of the most significant sectors. Seychelles has benefited from training and technical expertise as well as in the acquisition of assets. He referred to the gift of the second Dornier aircraft which will add significantly to the Seychelles Air Force’s capability for maritime surveillance.

Following the Delegation Level Talks the two Statesmen moved to the Ball Room of Hyderabad House where the two sides exchanged agreements in in the presence of the media and the two Statesmen. The agreements cover six sectors including culture, cyber security cooperation, maritime safety and security cooperation, small development grant projects, diplomatic training and a twinning agreement between the cities of Victoria, Seychelles, and Panaji, Goa.

Prime Minister Modi then donated a replica of the Dornier aircraft which is to be gifted to Seychelles on the occasion of our 42nd anniversary of Independence.

To conclude the ceremonies, the two Statesmen delivered their respective press statements before proceeding to a lunch hosted by the Indian Premier in honour of the Distinguished Guest and his entourage.

- Press statement of President Faure can be seen at this link: http://www.statehouse.gov.sc/statements.php?news_id=3996