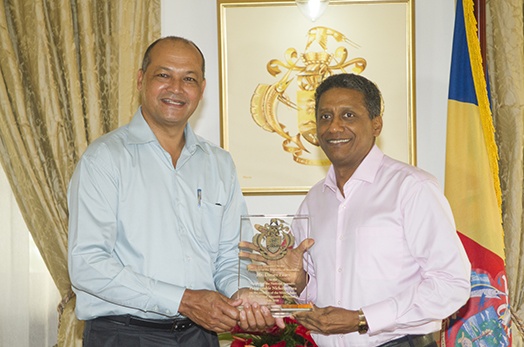 On behalf of the government and the people of Seychelles, the President of the Republic congratulated the Speaker, honourable members of the National Assembly and the Staff of their Secretariat on the Silver Jubilee anniversary of the Legislative branch.

During the meeting, the President and Speaker Prea discussed the cooperation between the Legislative and Executive and how to further enhance the working relationship between the two branches.

In his remarks to the press after his meeting with the President, Honourable Prea said he appreciates the gesture and that the shield will be put in their museum at the National Assembly of Seychelles, all in honour of the 25th anniversary of the assembly. Having served in the third and fourth assembly, Speaker Prea noted the good working relationship that exists between the National Assembly and the Executive.