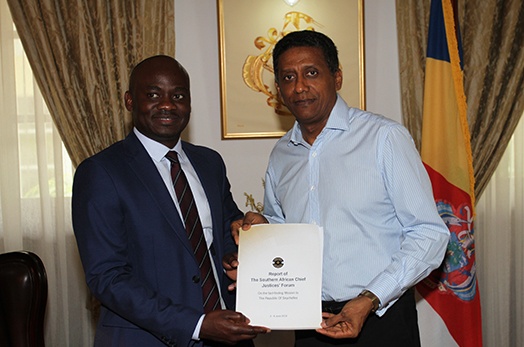 President Danny Faure has today received the report of the fact-finding mission undertaken by two Chief Justices from the Southern African Justices' Forum (SACJF) from 3rd to 8th June 2018, concerning the state of the rule of law, the independence of the Seychelles Judiciary and the security of tenure of judicial officers.

The fact-finding mission, led by Chief Justice Hon Peter Shivute of Namibia, and Chief Justice Hon Andrew Nyirenda of Malawi, was undertaken against the backdrop of pending disciplinary matters concerning two members of the Judiciary.

The Report of the Fact-Finding Mission contained six recommendations:

(a)      There must be an expeditious finalisation of the investigations of Judge Duraikannu Karunakaran and the Chief Justice Dr Mathilda Twomey, in  accordance with the dictates of natural justice and fairness;

(b)      Judicial officers must continue to be vigilant in ensuring independence of the Judiciary and their own independence in accordance with the Constitution and the law;

(c)       Lawyers must continue to act in a professional manner and continue to assist the Judiciary in their efforts to attain due administration of justice;

(d)      The Legislative and Executive branches of Government must respect and promote the independence of the Judiciary;

(e)      The legislative authorities should consider amending the Constitution to include the Head of the Judiciary as an ex-officio member of the Constitutional Appointments Authority;

(f)       The authorities should consider introducing legal reforms to promote the independence of the legal profession in accordance with international and regional best practices.

Copies of the Report were also given to other dignitaries with whom the fact-finding Mission had met.  These included the Chief Justice Dr Mathilda Twomey, the President of the Court of Appeal, Justice Francis MacGregor, the Leader of the Opposition, Hon Father Wavel Ramkalawan, the Secretary of State for Foreign Affairs, Ambassador Barry Faure, the Attorney General, Mr Frank Ally, and the Chairman of the Constitutional Appointments Authority, Mr Michel Felix.

President Faure thanked the representatives of the SACJF for the Report, and for the Forum's interest in the wellbeing of the Seychelles Judiciary.