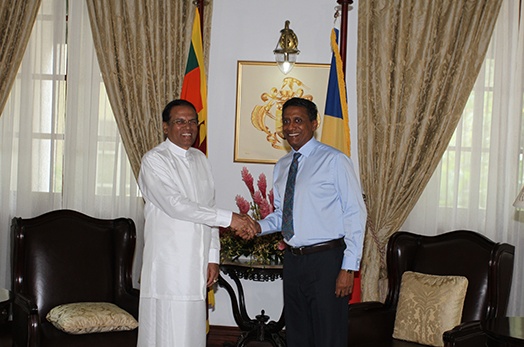 His Excellency President Danny Faure received H.E Mr Maithripala Sirisena, President of the Democratic Socialist Republic of Sri Lanka, at State House this afternoon. The two leaders held a tête-à-tête meeting before proceeding to bilateral discussions, which was also attended by Vice-President Vincent Meriton, Ministers and other high officials from both countries.

In his opening statements at the bilateral meeting, President Faure welcomed the President of Sri Lanka and his delegation to Seychelles and expressed his appreciation of the visit which would bring additional impetus to the prevailing excellent friendship and cooperation between the two countries.

“Your Excellency it is truly an honour to welcome you and your delegation to Seychelles this week. Let me take this opportunity to thank you for accepting my invitation for you to visit Seychelles. There are many commonalities between Seychelles and Sri Lanka despite geographical distances and differences in size. Both are island nations. Both share the same ocean space. Both are neighbours. Both were and still are influenced by historical currents and the present day geo-strategic and economic dynamics. Thus, it is normal that we should have close ties and that our respective States should develop diplomatic relations and relations of cooperation. This month of October 2018, our two countries commemorate 30 years since we established diplomatic relations. I would like to renew my commitment to continue to work to strengthen our bonds of Friendship,” said President Faure in his remarks.

During the meeting, President Sirisena confirmed that Sri Lankan government would be able to offer 10 scholarship to Seychellois students annually. Sri Lanka would collaborate with Seychelles in the fight against drug trafficking, and in matters of defence and legal affairs. Both sides agreed to enhance cooperation in all spheres.  A joint commission would be set up to monitor closely the agreements between the two countries.

President Danny Faure welcomed these initiatives, adding that Seychelles would work to promote trade relations and stronger the economic ties with Sri Lanka.  President Faure said that Seychelles would continue to support Sri Lanka on the international arena, on issues of common interest, such as climate change.  President Faure also suggested that stronger ties be established between the legislatures of the two countries.

President Faure described the bilateral meeting as excellent and highly productive, and reflected the warmth between the two countries.

President Sirisena thanked President Faure for the warm welcome and hospitality extended to his delegation.  “It is a great pleasure and honour to be here in Seychelles. I am confident that we can move forward positively and to take our friendship further. Let me reassure you that our highest commitment is with you to ensure that this brotherhood continues and develop further,” President Sirisena added.

Following their meeting, the two leaders witnessed the signing of two cooperation agreements between the Government of Seychelles and the Democratic Socialist Republic of Sri Lanka in the education sector.

H.E. Dr. Tikiri Herath Gunathilake, High Commissioner of the Democratic Socialist Republic of Sri Lanka to the Republic of Seychelles

Second one; University of Vocational Technology (UNIVOTEC) of Sri Lanka (signed by Vice Chancellor of the University, Professor Wickramasinghé) and the Seychelles Institute of Technology (SIT) (signed by Director of the Institute, Dr Hubert B