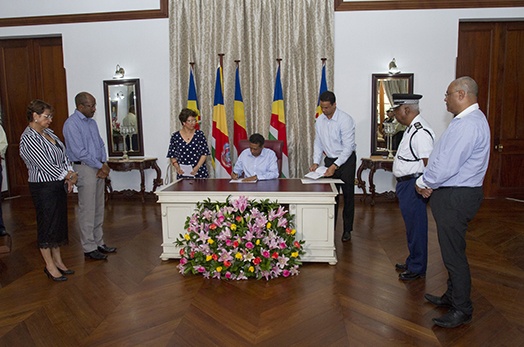 The President of the Republic of Seychelles, Mr Danny Faure, assented to the Seychelles Intelligence Service Act 2018 during a ceremony held at State House yesterday.

The approved Bill was sent to the Attorney General’s Office for drafting of the White copies on 14 January this year. The Final White copies were sent to the Office of the President on 14 February for assent.

During his remarks, delivered before the signing of the Act, the Commissioner of Police, Mr Kishnan Labonte, said that the Bill is a result of the collaborative effort of all relevant stakeholders and partners. He said, “In 2018 the Seychelles Intelligence Service Bill was presented to the National Assembly. Many hours of discussions, deliberations, writing, re-writing, and editing ensued. The Seychelles Intelligence Service Act is the result of this combined effort by the Executive as well as the Legislative. It has successfully resulted in a product that is in the best interests of Seychelles.”

The signing was witnessed by the Vice President of the Republic, Mr Vincent Meriton, Designated Minister, Mrs Macsuzy Mondon, the Attorney General, Mr Frank Ally, and the Commissioner of Police, Mr Kishnan Labonte. Also present at State House was the Leader of Government Business, Mr Charles De Commarmond, the Chief of Defence Forces, Colonel Clifford Roseline, and other distinguished guests.