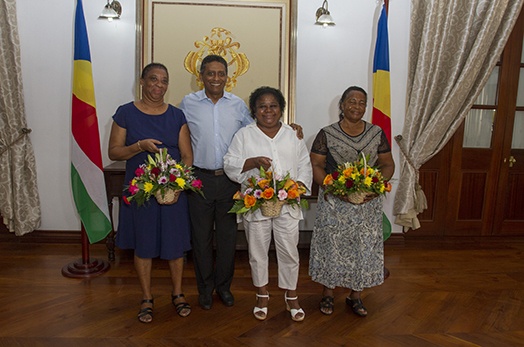 Mrs Lepathy will have served for 40 years on 1 April this year, and Mrs Jeanne D’arc Jacqueline and Mrs Jacqueline Bastienne have both clocked 38 years of service since January 2019.

“It is with great respect and admiration that I welcome all three of you to State House today. So many years of service in the same department is rare, and today I would like to personally thank you for your many years of devotion and commitment. It is my sincere hope that the younger generation follows in your foot steps and adopt the same discipline and work ethic you have shown for so many years,” said President Faure.

The invitation to State House for the three employees stems from a recent visit by President Faure to the Seychelles Judiciary as part of his series of weekly visits to institutions. During the meeting at State House, the three employees shared with the President memories of their past work experience and how they have witnessed the evolution and transformation of the Seychelles Judicial Branch.

Mrs Lepathy is currently the Deputy Registrar. She joined the Judiciary as a Clerk/Typist in April 1979, whilst Mrs Jeanne D’arc Jacqueline is presently an Accounts Technician Grade 3 who began her career at the Judiciary as a Clerical Assistant. Mrs Jacqueline Bastienne is the Housekeeper Supervisor and she started as a Housekeeper in January 1981 on what was formerly the Full Employment Scheme (FES).

Speaking on behalf of the three staff, Mrs Lepathy shared that they were very happy to be received by the President at State House and said it was a privilege to be recognised by the Head of State for their long years of hard work.

They were accompanied to State House by the Registrar, Mrs Juliana Esticot.