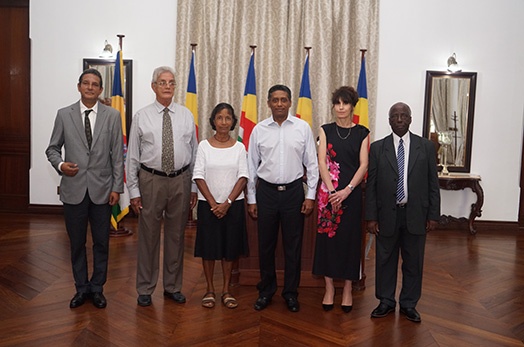 Chairperson and Commissioners of the Truth, Reconciliation and National Unity Commission Sworn in

President Danny Faure witnessed the swearing-in of the Chairperson and Commissioners of the Truth, Reconciliation and National Unity Commission during a ceremony held at State House this afternoon.
The Chairperson of the commission is Mrs Gabrielle Louise McIntyre, and the Commissioners are Bishop James Richard Wong Tin Song, Mrs Marie-Therese Pervis, Mr Michael Green, Mr Jaques Koui Gbilmou, Mrs Marie-May Leon and Mr Pierre Rosario Domingue. They have been appointed following recommendations made to President Faure by the Constitutional Appointments Authority.
During the ceremony the members of the Commission present took two Oaths – the Oath of Allegiance and the Official Oath. Two members of the Commission, Archbishop James Wong and Mrs Marie-May Léon, were absent from today’s ceremony and will take their oaths at a later date.
Addressing guests during the ceremony, the Attorney General Mr Frank Ally, highlighted the historical significance of the inauguration of the commission and retraced some of the key stages that have led to the swearing-in of the members of the commission today.
Ms Gabrielle Louise McIntyre, the Chairperson of the Truth, Reconciliation and National Unity Commission, is an Australian lawyer with 23 years of experience in particular in the field of human rights. She is a leading legal expert on international criminal law procedure and international humanitarian law. She has contributed as a Transitional Justice Expert in countries such as Rwanda, Kosovo, Congo and Uganda. She served as a legal advisor for the International Criminal Court in The Hague for the former Yugoslavia from July 2004 until November 2015. Before her appointment to the Commission, she was the Chair of the Board of Directors of Women’s Initiatives for Gender Justice in The Hague and Uganda.
Mr Pierre Rosario Domingue has been the Chief Executive Officer of the Law Reform Commission of Mauritius since 2006. He is an experienced lecturer on Human Rights and formerly headed the Department of Law at the University of Mauritius. From 2012 until 2020, Mr Domingue served as a Consultant to the Office of the Prime Minister of the Republic of Mauritius and worked on the Action Plan on Human Rights. He chaired the Advisory Committee set up by the Government of Mauritius on the Reinforcement Framework for Protection against Domestic Violence. Mr Domingue is familiar with the laws of Seychelles and has provided legal advice to the Bills Committee of the Seychelles National Assembly on the revision of the Civil Code of Seychelles.
Dr Marie-Thérèse Purvis is a sociologist and educationist by profession. She has held positions including Director of the National Institute of Education and Coordinator of higher education. Dr Purvis served as a member of the Electoral Commission of Seychelles from 2011 until last year. She has received training in Strategic and Financial Planning, Election Observation and Management of Democratic Elections in Africa. Presently, she is an independent consultant, Chairman of the NGO Sustainability for Seychelles and a member of the Plant Conservation Action Group.
Mr Michael Green has held several positions including Elected Member of the Governing Council of Seychelles in 1969. He was an activist in trade unions and politics. Mr Green left Seychelles in 1997 to live abroad where he has held several posts in the tourism sector. Whilst overseas he has held a keen interest in the political affairs of Seychelles and has kept abreast with the country’s political developments.
Mr Koui Gbilimou is a retired teacher who is still active in civil society organisations. He has been involved with elections, human rights and democracy promotion through the NGO Citizen Democracy Watch Seychelles. He has conducted several workshops on Human Rights and Citizenship Education.
Present for the Ceremony at State House was the Vice President, Mr Vincent Meriton, the Leader of Government Business in the National Assembly, Hon. Charles Decommarmond, the Attorney General, Mr Frank Ally, the Ombudsman, Mrs Nichole Tirant-Ghérardi, members of the Constitutional Appointments Authority, and other distinguished guests.