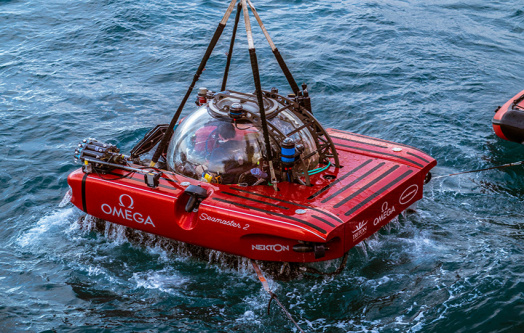 Victoria, Seychelles; Male, Maldives: ‘First Descent: Midnight Zone’ is a 35-day mission to support the sustainable governance of the Seychelles and Maldivian ocean including the protection of 629,000 km2.  A team of 50 international scientists, technicians, media and crew will be carrying out research to gather critical data to define conservation and management priorities and the designation of Marine Protected Areas. The expedition starts in Seychelles on March 16th 2020.

“A healthy planet needs a healthy ocean. The time to act is now. Seychelles is committed to ocean conservation and by the end of March, we will have 30% of our waters established as protected areas. Seychelles are demonstrating the scientific and economic case for sustainable ocean management and protection and we are delighted that other nations, like the Maldives, are taking leadership” said President Danny Faure of Seychelles.

“The ocean is a key part of each Maldivian.  71% rely on the ocean for their primary source of income. We have committed to a 5-year initiative to advance ocean protection and sustainably develop the blue economy.  This expedition will help us establish the long-term sustainability of our economic growth, livelihoods and jobs through establishing marine protected areas to build ocean resilience” said President Ibrahim Mohamid Solih of Maldives.

To support a healthy, resilient and prosperous ocean, scientists are calling for 30% of the ocean to be protected. Currently, only 2% is strongly protected and 8% is designated for protection.

First Descent: Midnight Zone is one of a series of expeditions that Nekton, a UK charitable research institute, are carrying out across the Indian Ocean documenting changes beneath the waves in a bid to catalyse 30% protection by 2030.

“Having so recently had the pleasure of welcoming Maldives back into the Commonwealth family, it is very satisfying that our partnership with Nekton will support Maldives and Seychelles in fulfilling their commitment to ocean sustainability. Seychelles is our Commonwealth Blue Charter champion for marine protection, and by safeguarding 30% of its waters for conservation it sets a fine example which we hope will be followed by other countries. This mission is a very practical expression of how Commonwealth Blue Charter values in action are leading to enhanced protection in the Indian Ocean, and to improving ocean health more generally for our planet,” said Commonwealth Secretary-General Patricia Scotland.

“The Indian Ocean is the least explored and least protected ocean. It is already home to nearly 2.7 billion people and by 2050 it will be home to half of the world’s population. How the Indian Ocean changes, will profoundly affect the lives and livelihoods of billions of people”, explained Oliver Steeds, Nekton Mission Director.

The Indian Ocean Dipole, a climate phenomenon similar to El Nino, magnifies the impact of climate change. It increases the frequency, intensity and impact of extreme climate events throughout the region. Over the past 12months these have included the bushfires in Australia, cyclone Idai in Mozambique, major flooding in Indonesia and India and drought in Southern Africa, where the Victoria Falls has been reduced to a trickle.

The joint Seychelles-Maldives Expedition is led by scientists from Nekton and the University of Oxford working with, and on behalf of the Governments of Seychelles and the Maldives. Scientists from Seychelles and the Maldives will be participating throughout the mission. Dr Lucy Woodall, Nekton’s Principal Scientist, University of Oxford said: “Seamounts have high levels of biological diversity and biomass with a complex mosaic of habitats. They provide stepping stones between coastal areas that can act as nurseries for juvenile fish and are highly productive fishing grounds”. Dr. Woodall added, “Seamounts are poorly studied across the globe but are being increasingly impacted by human activities as technology allows exploitation of ocean resources at greater depths and distances from land”.

“Every day, as the sun sets, animals rise from the deep ocean to feed. As the run rises, they descend. This is the Vertical Migration, the largest migration on Earth. Every night, they draw carbon from the surface, into the depths, into the Midnight Zone, the largest carbon store on our planet”, explained Sheena Talma, Seychellois marine scientist, one of Seychelles’ first Aquanauts and the expedition’s Science Programme Manager.

The expedition will be using the world’s most advanced deep diving submersible alongside a dozen research tools including landers, sampling, sensor and mapping technology.  In August 2019, the submersible – Limiting Factor – built by Triton Submarines, completed the world's first manned exploration of the deepest point in each of the five oceans (Five Deeps), and is the only human occupied vessel that can visit any place in our oceans.

The expedition’s Mothership, DSSV Pressure Drop, and submersible have just completed sea trials in the Mediterranean before beginning the journey towards Seychelles.

First Descent – Midnight Zone is supported by Nekton’s unique alliance of business, governments, academia and civil society uniting behind a common purpose to explore and conserve the ocean.

For updates on the expedition, visit www.nektonmission.org.

Seychelles: The Seychelles Marine Spatial Plan and Seychelles Blue Economy Plan is being undertaken by the Government of Seychelles in partnership with the Nature Conservancy. By 2020, this will result in sustainable management of all of the Exclusive Economic Zone including 30% within newly formed Marine Protected Areas (445,000km2 of 1,336,559 km2). The implementing partner for the expedition is the Ministry of Environment, Energy and Climate Change.

Maldives: Maldives Blue Prosperity Programme is being undertaken by the Government of the Maldives in partnership with the Blue Prosperity Coalition and the Waitt Institute. The Programme begins in 2020 with a goal of the sustainable management of the Maldivian Exclusive Economic Zone including a spatial target of at least 20% within newly formed Marine Protected Areas (184,000km2 of 923,000km2). The implementing partner for the expedition is the Ministry of Fisheries, Marine Resources and Agriculture. First Descent – Midnight Zone is the third of four expeditions being undertaken in the Maldives in 2020 and 2021 in support of Maldives Blue Prosperity. #KanduFalhuDhiraasaa and #NooRaajje

First Descent is a series of missions undertaken by Nekton in partnership with Governments in the Indian ocean region. Beginning in Seychelles in 2019, the Mission concludes with a State of the Indian Ocean Summit in October 2022 to deliver scientific consensus on the state of the Indian Ocean and to galvanise 30% protection by 2030. Each mission combines national commitments to ocean protection, marine spatial planning, applied research to inform ocean policy, inspirational communications to strengthen the public support for political action and investments in capacity development to create a legacy of long-term sustainable ocean governance.

Seamounts are undersea mountains formed by volcanic activity. Scientists estimate there are at least 100,000 seamounts higher than 1,000 meters around the world. Recent estimates suggest that, taken together, seamounts encompass about 28.8 million square kilometres – a surface area larger than deserts, tundra, or any other single land-based global habitat on the planet. Seamounts attract an abundance of marine life, many of which are endemic to individual locations. Seamounts are productive fishing grounds for more than 80 commercial species worldwide.

Nekton is an independent not-for-profit research institute working in collaboration with the University of Oxford and is a UK registered charity. Nekton’s purpose is to explore and protect the ocean. Nekton’s missions are supported by a unique alliance of 40 business, government, academia and civil society partners uniting behind a common purpose to explore and conserve the ocean. They include:

A global coalition of NGO’s, academic institutions, and foundations working together to promote growth and prosperity while empowering sustainable management of marine resources and ecosystems. The coalition assists committed governments in developing and implementing sustainable marine spatial plans to protect the environment and improve the economy at the same time. Primary members in the Maldives partnership include Waitt Institute, National Geographic Pristine Seas, Scripps Institution of Oceanography, and Nekton. Blueprosperity.org #BlueProsperity

Established by Gateway, Inc. co-founder Ted Waitt in 1993, the Waitt Institute, partners with committed governments to develop and implement comprehensive, science-based ocean management plans that benefit both the economy and the environment with the ultimate goal of sustainable, resilient, and thriving seas that benefit all. Waittinstitute.org

Caladan Oceanic is the owner of the Expedition’s Mothership (DSSV Pressure Drop) and submersible (Limiting Factor) and is a private company dedicated to the advancement of undersea technology and supporting expeditions to increase the understanding of, and support, the productive sustainment of the oceans. Founder Victor Vescovo has long had a passion for exploration and has summited the highest peak on all seven of the world’s continents including Mt. Everest and skied at least 100 kilometers to both the North and South Poles. He also served for 20 years as an officer in the US Navy Reserve, retiring with the rank of Commander. With the completion of the Five Deeps Expedition, Vescovo has become the first person in history to have been to the top of all the world’s continents, both poles, and the bottom of all its oceans.