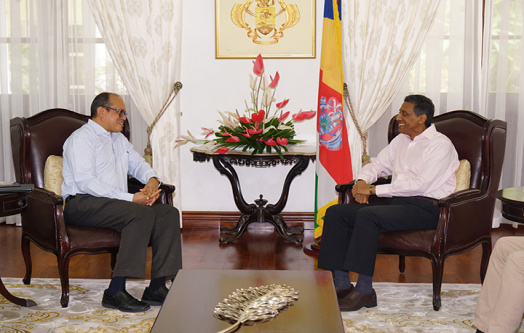 President Danny Faure received Professor Rolph Payet, the Executive Secretary for the Basel, Rotterdam and Stockholm Convention at the United Nations, at State House today. He was accompanied by the Seychelles Principal Secretary for Environment, Mr Alain Decomarmond.

President Faure welcomed Professor Payet on his second official visit in the country and thanked him for his contribution to global environmental protection and advocacy. During the meeting, Professor Payet briefed the Head of State on the meeting on Plastic Waste Partnership Group, whereby Seychelles is co-chairing this first international working group.  The meeting stems from a resolution by member states at the 14th meeting of the Conference of Parties (COP14) of the Basel Convention on the Control of Transboundary Movements of Hazardous Waste and their Disposal to establish a plastic waste partnership comprising different member states towards managing plastic waste in an environmentally sound manner.

This Conference is seeing the participation of some 100 participants from different states, organisations, private sector and civil society, and seeks to get the ball rolling on discussions on how to implement an action plan in relation to the plastic pollution issues being faced by the world.

President Faure and Professor Payet discussed the issue of plastic pollution in Seychelles, the different efforts being made to tackle it, and what solution there is to reduce and prevent it. They also spoke about how Seychelles can benefit from the Global Environment Facility (GEF) to modernise its laws and regulations in place in respect to waste management.

At the international level, Professor Payet shared with President Faure his work and experiences since he has taken up office as the Executive Secretary for the Basel, Rotterdam and Stockholm Convention, at the United Nations. To note, Professor Payet’s work in advancing environment, islands, ocean, biodiversity and climate issues at the global level has earned him numerous international awards and recognition.