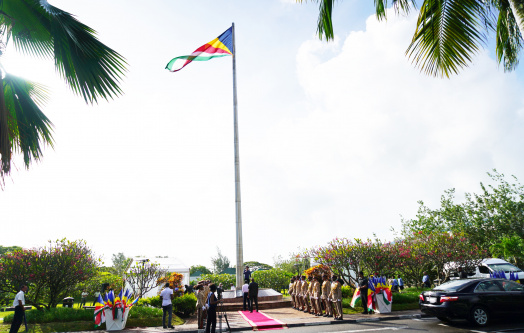 The President of the Republic, Mr Danny Faure, attended the annual flag raising ceremony at the ‘Moniman Lavwa Lanasyon’ (Voice of the Nation monument) on 5th June Avenue this morning to commemorate the 27th Anniversary of the Third Republic of Seychelles.

This year’s brief ceremony took place in line with Public Health Authorities Guidelines and was attended by limited government officials. It paid tribute to the Constitution, the Supreme Law of the land, as well as the National Flag and National Anthem.

The ceremony featured a flag procession by youths from Young Citizens, Scouts, and the Duke of Edinburgh programme organised by the Seychelles National Youth Council, and the flag raising and national anthem by the Seychelles Coast Guard. It also featured a song called Zarden Lanmour by Daniel Fostel.

Also present for the flag raising ceremony this morning was the Vice-President, Mr Vincent Meriton, the Speaker of the National Assembly, Honourable Nicholas Prea, the President of the Court of Appeal, Justice Anthony Fernando, the Chief Justice of the Supreme Court, Dr Mathilda Twomey, Designated Minister Macsuzy Mondon, the Leader of the Opposition, Hon. Wavel Ramkalawan, the Leader of Government Business in the National Assembly, Honourable Charles Decommarmond, the Chief of Defence Forces Colonel Clifford Roseline and the Commissioner of Police, Mr Kishnan Labonte.