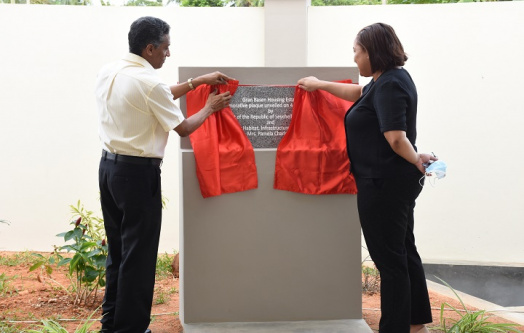 President Danny Faure attended the official opening of the Gran Basen Housing Estate at Anse Aux Pins this evening. The President was accompanied by the Minister for Habitat, Infrastructure and Land Transport, Mrs Pamela Charlette, and unveiled the plaque to officially declare the estate open.

Construction work for the Gran Basen Housing Estate started in August 2018. The contract was awarded to Ascent Project and came to a total cost of 15.2 million Rupees. It comprises of 2 blocks including 6 two-bedroom and 6 three-bedroom units. A third block is scheduled to be constructed as part of the housing project to make a total of 18 units.

Speaking at the event, Minister Charlette stated that the project demonstrates Government’s capability and commitment to assist those in need with housing, despite the challenges with terrain, which was encountered with Grand Basen. She noted that the units have been designed to maximise space and comfort for the new homeowners.

Her remarks were followed by the vote of thanks on behalf of the new homeowners by Mrs Shintha Bastienne, following which the President toured the housing estate.