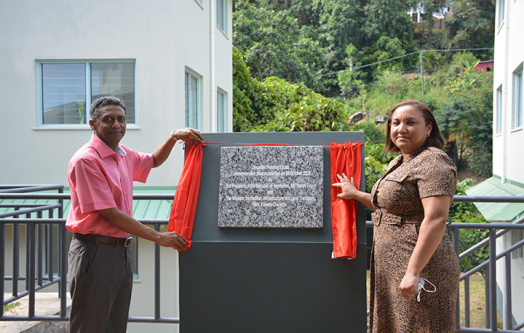 President Danny Faure attended the official opening ceremony of the Desaubin Housing Estate at Takamaka this afternoon.
The highlight of the event was the formal unveiling of the commemorative plaque by the President and the Minister of Habitat, Infrastructure, and Land Transport, Mrs Pamela Charlette, to officially declare the estate open.
The Desaubin Housing Estate comprises of 40 units comprising of 28 three-bedroom units and 12 two-bedroom units. The first batch comprising of 10 units has already been allocated to make way for the demolition of old temporary houses.
The project was awarded to Mahe Design and Build encountered delays as a result of pipeline outfall for the sewage treatment plant which required negotiation with private landowners.
The cost of the projects is around 35 million rupees made possible through a grant from the UAE and Abu Dhabi Fund.