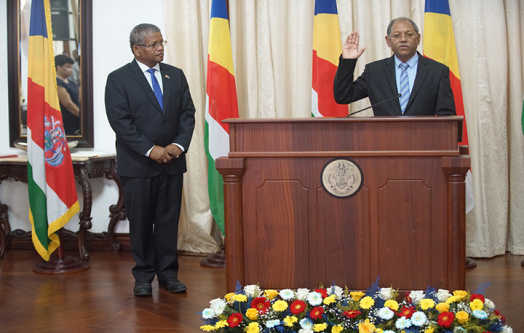 Vice President of the Republic of Seychelles Sworn in

The Vice President Elect, Mr. Ahmed Abdullah Afif was sworn in as the new Vice President of the Republic of Seychelles this afternoon at State House in the presence of the newly-elected President Mr. Wavel Ramkalwan and other distinguished guests.

During the ceremony Mr Afif took the oath of allegiance and Vice Presidential oath. Mr Afif was the running mate of President Ramkalawan in the recent Presidential Election.

He holds a BSc with honours in Maths, Operational Research, Statistics and Economics (MORSE) from Warwick University, UK and has held various posts up to the level of Principal Secretary before being elected Member of the National Assembly for the Anse Etoile Constituency in 2016.

Also present at State House to witness the ceremony were Mr Afif's family and friends.