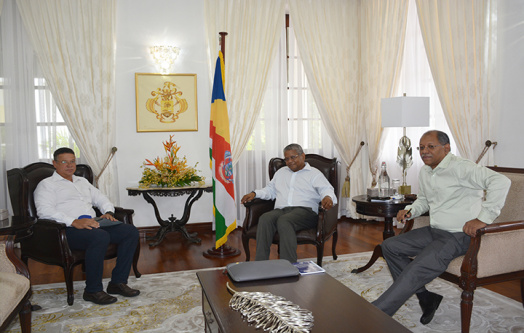 President Ramkalawan continues with series of familiarisations in key sectors

President Wavel Ramkalawan continued with his series of familiarisation sessions with key officials from critical sectors in the country yesterday.  The series of meetings is providing the new Head of State with the opportunity to better acquaint himself with their mode of operation and discuss ongoing challenges in line with making informed decisions, in the best interest of the people and the country.

As a follow up of the meeting held yesterday at State House with the Commissioner of Police, Mr Kishnan Labonte, the President this morning visited the Police Headquarters at  8am. He was met by the Commissioner of Police and the two deputies, Mr Ted Barbe and Mr Romano Songor. The President was briefed on some of the sensitive matters being investigated by the Police.

Leaving the Police Head Quarters. The President accompanied by Vice-President Ahmed Afif met with the Public Health Commissioner, Dr. Jude Gedeon at State House for an update on the global situation and the local context with regards to COVID-19 to date.

In the afternoon, President Ramkalawan held a second meeting with the Governor of the Central Bank, Ms Caroline Abel and her team as a continuation of discussions of the current finance and economic perspective of the country.

Still vis-à-vis finance and to obtain more in-depth information on the current financial outlook of the country, in the afternoon the President also held discussions with senior officials of the Ministry for Finance, Trade, Investment and Economic Planning during a meeting held at Liberty House. During discussions, he was briefed by the Secretary of State for the Ministry, Mr Patrick Payet, the Principal Secretary for Finance, Mr Damien Thesee and the Principal Secretary for Economic Planning Department, Mrs Elizabeth Agathine.