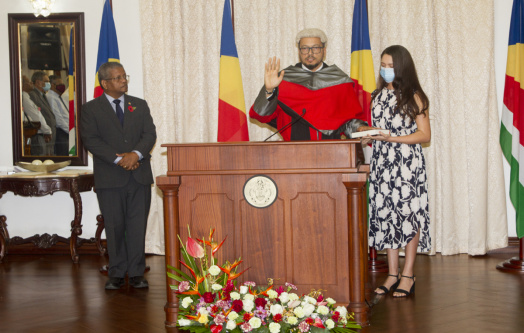 Chief Justice of the Supreme Court of Seychelles Sworn In

The President of the Republic, Mr Wavel Ramkalawan witnessed the swearing in of Justice Rony James Govinden appointed Chief Justice of the Supreme Court of Seychelles during a ceremony held at State House, this morning.

Justice Govinden was elevated to puisne Judge in March 2017. He has a Bachelor of Laws with Honours from the University of Mauritius and sat for his Bar at the Council of Legal Education Mauritius in 1997.

During his remarks, President Ramkalawan congratulated the new Chief Justice and highlighted that despite the great responsibility bestowed on him in his new role and the expectations; he believes that his appointment today also signifies a new beginning and an opportunity for all the three branches of government to give their very best to the country.

“As you took your oaths today, I was reminded that Seychelles has experienced a complete change in the Heads of all three branches of Government, it is indeed a new Government, within two weeks we have had a new head in the Executive, followed by a new head of the Legislature and now a new head of the Judiciary. I believe this is an opportunity for us to make this new start and for us to rise in order to give our people and our country the very best” said President Ramkalawan.

Speaking to the Press after the swearing in ceremony, Chief Justice Govinden said he is honoured to be serving his country and recognizes the great responsibility that his appointment brings but is nonetheless ready to perform his duties to the best of his ability.

Present at State House for the swearing in ceremony, was the First Lady, Mrs Linda Ramkalawan, the Vice President, Mr Ahmed Afif, the Speaker of the National Assembly, Mr Roger Mancienne, the President of the Court of Appeal, Justice Anthony Fernando, Leaders in the National Assembly, the Attorney General, Mr Frank Ally, Judges, the Chairperson and Members of the Constitutional Appointments Authority, distinguished guests and relatives of Chief Justice Govinden.