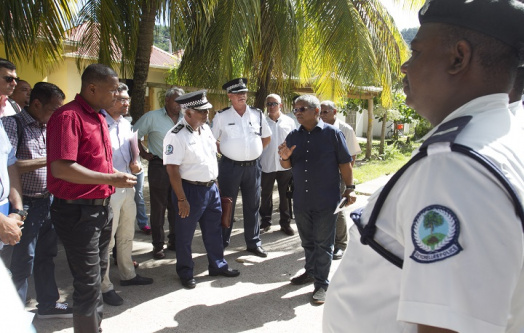 President Wavel Ramkalawan visited various government institutions and agencies on La Digue yesterday. The visit forms part of President Ramkalawan’s series of visits to familiarize himself with public institutions, engage in consultation on upcoming major community projects and meet employees in their workplaces.

Upon arrival, the President was welcomed by Member of the National Assembly (MNA) for the Inner Island, Hon. Rocky Uranie and LDS National Assembly Candidate Mr Loncy Micock. The visit started at La Passe where the Presidential delegation visited potential sites for the relocation of the La Digue Police Station and new accommodation facilities proposed for both the Police and Fire and Rescue personnel. Accompanied by the Commissioner of Police, Mr Kishnan Labonte and Assistant Commissioners, the President called on the officers present to take their work seriously and ensure Law and Order is maintained on the island.

This was followed by a brief tour at the Fire and Rescue Services Station located nearby. The officials present had the opportunity to share their mode of operation and highlight key requirements and challenges that are negatively affecting their work.

Also at La Passe, President Ramkalawan and delegation visited the Seychelles Port Authority (SPA) where he was welcomed by the CEO of SPA, Mr Ronny Brutus. The delegation and the SPA Team visited key sites as part of new La Digue Port Redevelopment Plan. They also had the opportunity to update the President on the current challenges they encounter and possible solutions to issues raised.

The delegation then proceeded to the Seychelles Trading Company (STC) wholesale and Warehouse Depot. Upon arrival, President Ramkalawan was able to witness their daily operations and view the warehouse storage, building material section and offices. The President gave instructions for key issues identified requiring immediate action to be rectified to ensure ease of service delivery and greater comfort for the STC staff.

President Ramakalawan also visited the existing Logan Hospital located in the heart of the Island, at La Passe and the site being proposed for construction of the new hospital, a project of which the Government has already secure funding and is currently at conceptualising of a State of the art Modern Hospital.

At l’Union Estate, the delegation obtained a guided tour of the Estate and viewed the various services on offer. They were brief on the various agricultural activities such as local livestock, organic food produces and other future value added prospects for L’union Estate. The President commended them for the great work being done in line with ensuring local produced are made available to the people and further supporting the country in curding importation of some agricultural products hence retain some of its foreign exchange in the country.

Departing L’Union Estate, he also made a stop at the La Digue School where he received a warm welcome from the Students and School Management. President Ramkalawan toured the compound and discussed with School Management the long awaited plans for the building of the new school. The delegation also visited to Veuve Reserve office where the President obtained a brief tour of the information centre and services of the reserve.

In the afternoon, President Ramkalawan held a meeting with the La Digue Business Association and chaired a public meeting at La Digue Lodge where along with the presidential delegation outlined the action oriented approach of the new Administration.

He urged each Diguois to engage in the various consultations in order to collectively make positive contributions to the various community projects proposed for their home island La Digue.

Speaking to the Press after the visits and meeting, President Ramkalawan said he is overall very satisfied with the day’s events and expressed satisfaction for having been able to make the time to hold discussions, view the situation first hand and hear the views of the people on La Digue themselves. He once again reaffirmed his commitment that the key priority projects identified such as Police Station, Hospital, and School are now on track and will be implemented for the benefit of the community.