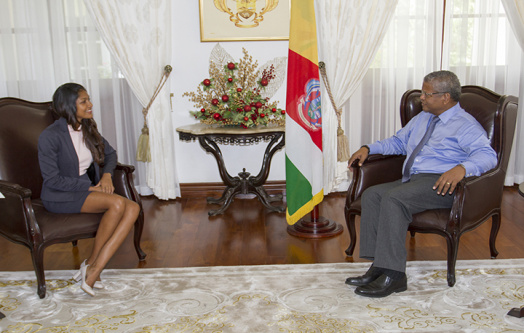 President Ramkalawan commended Emilie as an exemplary young lady with an amazing talent. The President congratulated her for the different awards she won, which has made Seychelles proud and wishes her all the best in her future endeavours.

“I am so proud of your achievements which has also made Seychelles proud. I want to encourage you to pursue further in what you intend to do. You have my support and that of the government with your future plans in filmmaking and with documentaries on Seychelles that will make other countries know more about us and for our people to know more about their own country. What you are doing should serve as an inspiration to other young people,” said President Ramkalawan.

Emilie recently did an official screening of one of her film 'Desert Rose', a short 15 minute tale of treasure and love that was filmed in Australia back in 2018. Emilie won the “Best Independent Short Film” and also received an “Honourable Mention Best Director” at the Global Film Festival Awards in Los Angeles in April of 2019 for her short romantic drama “Desert Rose”.  The film 'Painting Persiphine' has won its first award at the Accolade Global Film Competition for an Award of Excellence along with our other film, 'Desert Rose' for an Award of Merit.

During the meeting, Emilie shared with the President the various projects she has worked on, her passion for the environment and also her interest in music. Emilie also briefed the President on future projects such as a sequel of Desert Rose which will be shot here in Seychelles, feature film in Seychelles where she wishes to hire local actors and actresses, documentaries about marine conservation and biodiversity of Seychelles among other great ideas.

Speaking to the press after the meeting, Emilie expressed her gratitude for all the help she will get when she is ready with her projects. She said that this feels amazing as it is not easy to do things on your own especially here in Seychelles.