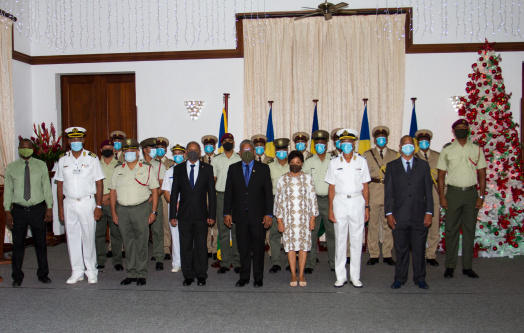 President of the Republic of Seychelles and Commander-in-Chief of the Armed Forces, Mr Wavel Ramkalawan, had the honour to promote and commission various SPDF Officials this morning. The ceremony took place at State House in the presence of the First Lady, Mrs Linda Ramkalawan, the Vice President, Mr Ahmed Afif, Members of the National Assembly as well as other high ranking officers of the SPDF and all the units of the Armed Forces.

The ceremony also consisted of the presentation of the customary retirement plaque to the former Chief of Defence Forces, Col. Clifford Roseline, followed by the Commissioning of eight Cadet officers and the promotion and commissioning of seven officers.

In his remarks, President Ramkalawan congratulated the SPDF Officers for their discipline and professionalism, traits he said he believes are exemplary and should continue to be upheld to reflect the SPDF’S continued journey towards achieving service excellence.  President Ramkalawan congratulated Col. Rosette and Col. Dine on their appointments and reaffirmed his support in working even more closely for the advancement of the SPDF and the country.

The President also thanked the outgoing CDF for his long years of service and expressed the hope that with Col. Roseline’s vast experience can continue to count on his support and advice during his presidency, although retired.

On 10th August 2020 a group of 8 Cadets officers began their Pre-commissioning course held at the Seychelles Defence Academy. The five month course provided the Cadet Officers with all the basic tools and skills to serve as commissioned officers. During the ceremony the Cadet officers pledged their oath of allegiance as new officers of the Defence Forces.

During the ceremony one of the Cadet officers,  2nd Lieutenant Ryan Mussard was rewarded as the best overall performer and presented with the Sword of Honour by the President and Commander In Chief.

Promotion and Commissioning of Officers