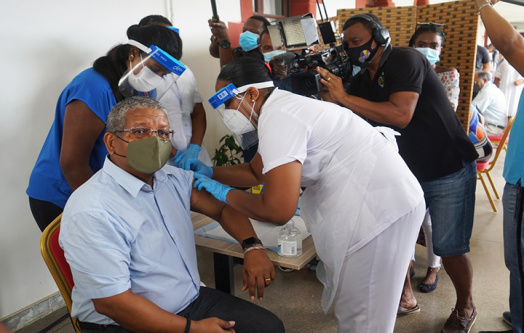 The President of the Republic of Seychelles, HE Wavel Ramkalawan today led by example to become the first Head of State in Africa to take the SinoPharm COVID-19 Vaccine. He officially launched the country’s National COVID-19 Immunisation Campaign, in efforts to mitigate the spread of the Corona virus in the island nation.

Following the launch today, the Ministry of Health will roll- out the administering of the Vaccine to key groups in the country as of Monday, starting with Health Care Workers and other front line groups.

In his address this morning at the Seychelles Hospital, President Ramkalawan reiterated the need for the country to unite as a nation and to rally behind the Health Authorities to help curb the spread of this deadly virus, protect the lives of all citizens and restore economic development in the country.

Also present at the ceremony was the Former President of the Republic, Mr. Danny Faure. President Faure thanked President Ramkalawan for having extended an invitation for him to be present and receive the vaccine. This was in show of his support for all the Health Professionals and in solidarity with the country, as it battles the COVID-19 pandemic.

On his part, President Ramkalawan expressed his sincere appreciation to Former President Faure for his Statesmanship and also as a responsible citizen leading by example in participating in the Vaccination Campaign for the greater good of the Seychellois Nation.

President Ramkalawan also expressed special thanks to the Crown Prince of Abu Dhabi and Deputy Supreme Commander of the UAE Armed Forces, His Highness Sheikh Mohamed bin Zayed Al Nahyan for the generous donation of the 50,000 doses of the Sinopharm COVID-19 vaccine that was offered during President Ramkalawan’s vist to Abu Dhabi in December. “This is testimony of the excellent friendly ties that exist between the two nations that has been further consolidated through continuous support for the mutual benefit of both peoples,” the President added.

The President announced that the UAE Government would also be donating another batch of vaccines expected in the country soon. In addition to the donation of vaccines, the UAE Government is further supporting Seychelles in its fight against the COVID-19 pandemic, through the use of the Avani Resort, Barbarons as a quarantine facility at no cost to the Government, as well as through the donation of tents for the setup of Screening Stations at Health Centres in the country.

President Ramkalawan further thanked the Indian Government for an offer of 100,000 doses of the Oxford Astra-Zeneca vaccine which is due to arrive in the country at the end of January. “With such a robust vaccination campaign, Seychelles aims to be the first country in the world to vaccinate at least 70% of its over 18 population. From there we will be able to declare Seychelles as being COVID safe. This will allow us to reopen our economy,” President Ramkalawan reiterated.

President Ramkalawan also commended the Seychellois population for the strong sense of solidarity brought forth during this time of Public Health Emergency and announced that private donors and citizens wishing to make their contributions towards the vaccination campaign can now do so with the set-up of the new COVID-19 Relief Fund with the Central Bank of Seychelles, Account Number 14166.

Before declaring the official launch of the campaign, President Ramkalawan joined the Minister of Health, Mrs Peggy Vidot in thanking Dr. Jude Gedeon, Dr. Danny Louange, and the whole medical team and health workers for the tremendous work that they were fulling for the country.

During the official launch of the Vaccination Campaign, Health Care Workers and other leaders in the country including the the First Lady, Mrs Linda Ramakalawan , the Vice-President, Mr. Ahmed Afif, Mrs Stella Afif, Former President Danny Faure, the Chief Justice, Justice Ronny Govinden, Ministers, Members of the National Assembly, Health Care Leaders and other community leaders also took the vaccine in show of their support of the Vaccination Campaign.