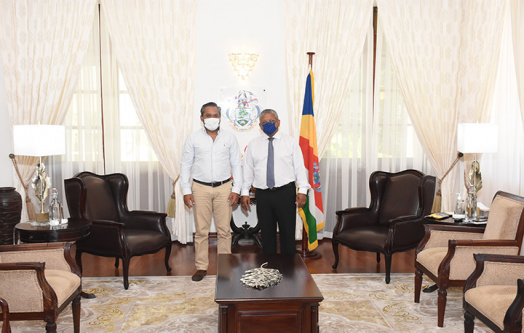 The President congratulated Mr Chetty for having been elected to the Confederation of African Football (CAF) executive committee as an ordinary member during the CAF’s annual general meeting which was held in Rabat, Morocco in March. President Ramkalawan described his nomination as an achievements for him personally and for Seychelles, where he will be in a better position to put forward Seychelles’ input and agendas.

The meeting was an opportunity for Mr Chetty to share with the President the SFF’s progress and preparation for upcoming competition; the African championship (AFCON) beach soccer to be held in Senegal in May.

The Head of State who is also the Patron of the Seychelles Football Federation extended his support to him and in the organisation of any activities locally that will keep pushing football forward.

Mr Elvis Chetty is the second Seychellois to be appointed as a member on CAF after Mr Suketu Patel. As a member of CAF executive committee, Mr Chetty is representing the southern zone of Africa along with Botswana's Maclean Letshwiti.