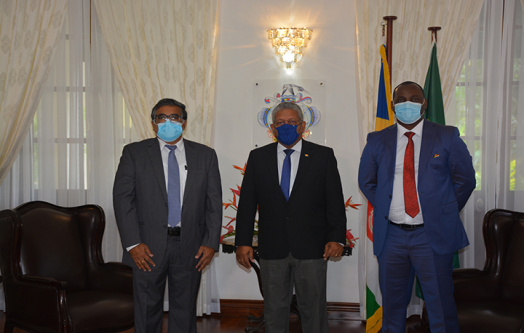 President Ramkalawan commended the Airtel group for their willingness to discuss and support the country through improved telecommunications services and products at more affordable prices. The President stated that as one of the major telecom service providers in the country, Seychelles is counting on their engagement and support in ensuring enhanced connectivity, particularly during this current COVID-19 pandemic, where telecommunication is regarded as a critical core service for the nation.

During the meeting, discussions also centred on Airtel’s latest project being launched this evening; the new data centre and head office located at Ile Perseverance. Mr Mandava also had the opportunity to brief the Head of State about their main community based outreach project particularly focused in the Education sector through the recent launching of a new Learning Centre at Baie St Anne Praslin primary school. The learning centres forms part of a joint project launched in partnership with the Ministry of Education.

Following his meeting with the President, the Airtel delegation also paid a courtesy visit to the Vice-President, Mr Ahmed Afif who is also the Minister responsible for Information Communications Technology (ICT). Also present was the Principal Secretary for Department of ICT, Mr Ben Choppy.

Speaking to the press after the meetings, Mr Mandava said Seychelles was the first country that Airtel ventured in outside of India in 1998, and such depicts the emotional connection and significant Seychelles represents for the organization. He described discussions with the President as excellent and further reaffirmed their commitment to continue investing in new products and services as well as explore alternatives to providing best quality data service at lower prices, for the benefit of all users and the country in general.