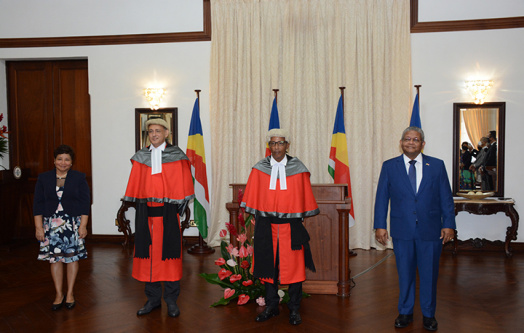 The President of the Republic, Wavel Ramkalawan presided over the swearing-in ceremony of Justice Brassel Adeline and Justice David Esparon as Puisne Judges of the Supreme Court at State House yesterday morning. President Ramkalawan has appointed the two Judges upon recommendations made by the Constitutional Appointments Authority pursuant to Article 127 of the Constitution of the Republic of Seychelles.

During the ceremony, in the presence of various distinguished guests and family members His Worship Adeline and Mr Esparon took two oaths; the Oath of Allegiance to the Constitution and the Judicial Oath.

Delivering his remarks at the event, President Ramkalawan congratulated and wished the two new Judges courage in their new tasks ahead. He urged them despite the enormity of the responsibilities bestowed upon them, to always maintain and adhere to the core values of humility, integrity and when in doubt to always seek wisdom.

Prior to their appointments, Judge Adeline was the Master of the Supreme Court and Mr Esparon, the Deputy Attorney General.

Also present for the ceremony at State House, was the First Lady Mrs Linda Ramkalawan, the Vice President, Mr. Ahmed Afif, Speaker of the National Assembly, Hon. Roger Mancienne, the Chief Justice of the Supreme Court, Justice Ronny Govinden, the President of the Court of Appeal, Justice Anthony Fernando, the Leader of Government Business in the National Assembly, Hon. Bernard George, the Attorney General, Mr Frank Ally, the Secretary of State for Cabinet Affairs, Mr Mohammed Afif, Members of Constitutional Appointments Authority and relatives of the two Judges.