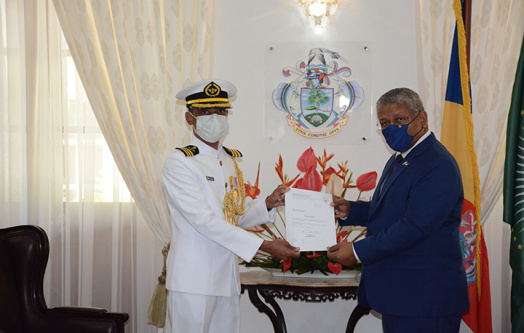 President of the Republic of Seychelles and Commander-in-Chief of the Armed Forces, Mr Wavel Ramkalawan, had the honour to promote Lieutenant Colonel Jean Attala as the Commander of the Seychelles Coast Guard. There to witness the handling of letter of Appointment to Lieutenant Colonel Jean Attala at State House was the Vice President, Mr Ahmed Afif, and other high ranking officers of the SPDF and all the units of the Armed Forces.

The President congratulated Lieutenant Colonel Attala on his new appointment which takes effect on the 01st August 2021 and conveyed his continuous support in working closely with him as well as other branches of the Armed forces geared towards to further consolidate the structure of SPDF and ensure its development.

“Today, I wish to commend you on your appointment which comes with great responsibility and challenges. Since you have taken up the charge as Acting Commander of the Seychelles Coast Guard, you have shown professionalism and performed the tasks bestowed on you diligently. As the Commander of the Seychelles Coast Guard ensure that there’s continuous discipline among the officers under your command. Continue to lead on the fight against illegal activities such as narcotics which is causing so much social ills in our country,” remarked the President.

Lieutenant Colonel Jean Attala started his career with the SPDF on April 1991. Since then, he has taken different posts as he rises in the hierarchy of the Armed forces and followed various extensive trainings internationally. Furthermore, Lt Col Attala is a graduate of the 62nd Staff Course of the Defence Services Staff College (DSSC), Wellington, India (2006-2007). He holds a ‘psc’ and MSc Degree in Defence and Strategic Studies, from the affiliated University of Madras, India. He is a graduate of the French ‘L’Institut des Hautes Études De Defense Nationale (IHEDN) 196th regional session of 2014, and an alumnus of the Africa Center for Strategic Studies based in Washington DC, USA.

Speaking to the media after ceremony, the Commander of the Seychelles Coast Guard reaffirmed the commitment of his units in dealing with issues regarding maritime security. He said that this can be achieve in partnership with local agencies as well as with other international forces that works in the region in order to synergise their efforts to deal with illegal activities and that mariners can operate in a safe and secure environment.