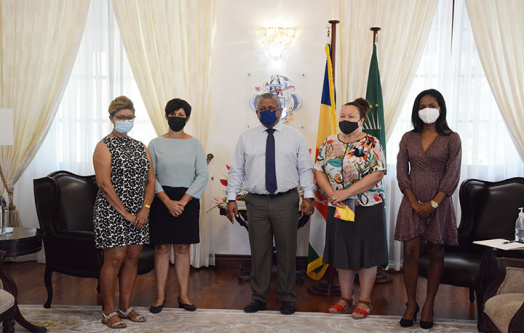 President Ramkalawan receives the members of the Seychelles Stroke Foundation

President Wavel Ramkalawan met with members of the Executive Committee of the Seychelles Stroke Foundation, led by the Chairperson Ms Noëmie Woodcock this morning at State House.

The President welcomed the members to State House and expressed his admiration for their continued efforts to offer support to Stroke patients and their families.

The meeting was an opportunity for Ms Woodcock and other members to brief the Head of State the overall aim of the organization, activities planned to raise awareness and sensitise the public regarding stroke as well as further discuss their challenges. On the international front, the delegation shared with the President an account on their affiliations with the World Stroke Organisation and the African Stroke Organisation (ASO).

President Ramkalawan commended them for the work they are doing locally and in partnering with international organizations to raise awareness vis-à-vis stroke and in empowering the community on how they can identify certain signs and symptoms.  Furthermore, in encouraging the people to adopt healthier lifestyles. He concluded by giving his full support and that of the government to the Foundation.

In an interview with the press, the Ms Woodcock said that they are very satisfied with the outcome of the meeting. She highlighted that they are doing a lot locally to raise greater awareness and highlight the signs of stroke.

The foundation has been in existence since February 2018.