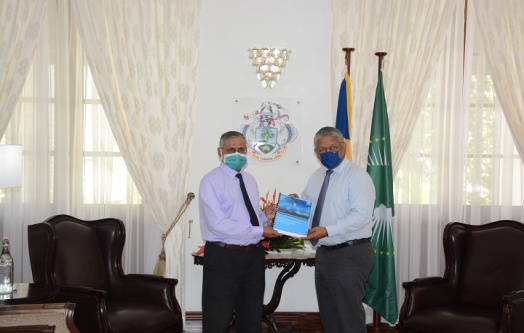 President Wavel Ramkalawan yesterday formally received the ranking report issued by the World Bank whereby Seychelles has been ranked the highest in the world alongside South Africa, among 118 countries. The Report was presented to the President by the Auditor General, Mr Gamini Herath.

Following his meeting with Mr Herath, the Head of State participated in a virtual event to recognize, share and celebrate the recent achievement of the Office of the Auditor General in Seychelles. During his remarks, the President once again commended the Seychelles’ Auditor General’s Office for their hard work and encouraged them to play a greater role in ensuring that all government facilities, departments and parastatals adhere to the laws and procedures in place.

“The work of the Auditor General ‘s Office is there to help the country ensure that taxpayer’s money is well spent. Secondly, that procedures are properly followed and adhered to and thirdly being accountable. I am proud today to say that Seychelles has made giant steps in achieving those objectives and thus governance is becoming clearer. People are starting to understand that a good government encloses all these good principles and through that, we can have a democracy that is indeed very strong,” said President Ramkalawan

The President continued by adding that, “It is the only way that we will eliminate corruption, further strengthen our various institutions and become a country where the rule of law is respected”.