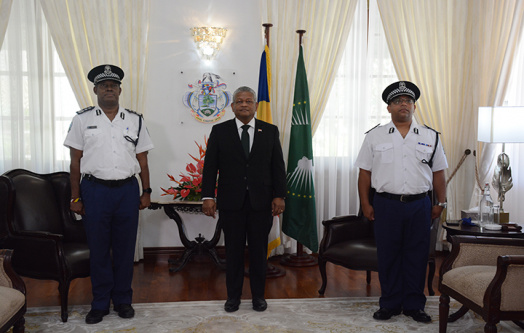 The President of the Republic, Mr Wavel Ramkalawan in consultation with the Commissioner of Police has appointed to the rank of Deputy Commissioner of Police (DCP), Mr Francis Songoire and Mr Ron Bonnelame. The appointments are in accordance with Section 8 (1) of the Police Force Act and will take effect as of 1st September 2021.

During a short ceremony at State House this morning, the two Deputy Commissioners of Police officially received their ranks from the Commissioner of Police, Mr Ted Barbe and were presented with their letters of appointment by President Ramkalawan.

Following their commissioning, the President congratulated the two officers on their achievements and wished them courage in the new task ahead. "I recognize the enormity of the task you both have at hand but I have every confidence that you will discharge your new responsibilities to the best of your abilities. You have accepted this challenge and are making a great sacrifice in answering the call to serve your country. For this, I wish to say I appreciate your devotion and pledged my full support and that of the Government in working together to restore confidence in our Police Force" said President Ramkalawan.

Also present at State House for the event was the Vice- President, Mr Ahmed Afif and the Minister for Internal Affairs, Mr Errol Fonseka.