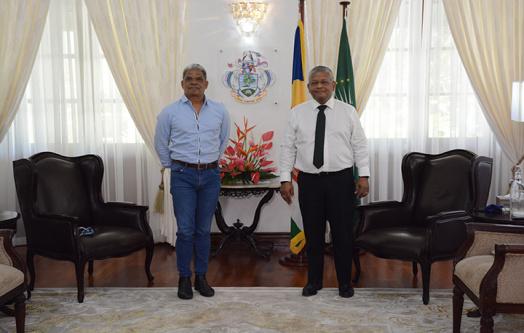 President Wavel Ramkalawan welcomed Mr Perrin Pierre at State House this morning following his recent act of Bravery by saving a  tourist from a near drowning incident on La Digue island, which occurred on 14th August.

The meeting with the Head of State, was an opportunity for President Ramkalawan on behalf of the country and the people of Seychelles to express appreciation to Mr Pierre for his bravery and commend him for reacting without hesitation to save a life whilst also putting his own at risk.

" Today on behalf of the country and the people of Seychelles I would like to formally express my heartfelt appreciation to you for your bravery. Not everyone has the courage to take such bold actions especially when it may cost them their own life. We are extremely proud and thankful for your actions and for your courage" said President Ramkalawan.

Speaking to the press after the meeting, Mr Pierre who is a professional photographer said he was honored to be invited by the President to share his experience and to also discuss potential options how can further introduce new safety measures that will be beneficial to the La Digue community during similar incidents.