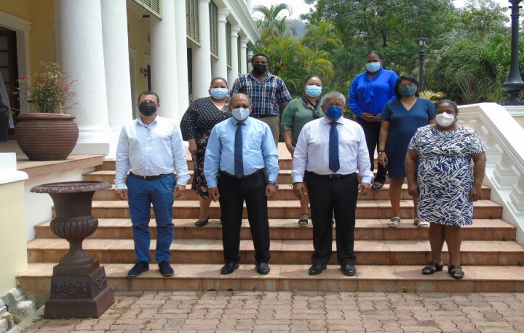 The President of the Republic, Mr Wavel Ramkalawan met with members of the Association of Media Practitioners Seychelles' (AMPS) at State House today.

Set up in 2014, the association represents Seychellois working in the Journalism sector and their interests.

The meeting was also attended by Vice-President Ahmed Afif who also holds the portfolio for information.  It was an opportunity for the members present to raise and discuss pertinent media related matters. Discussions centred particularly on issues they feel are affecting the work of journalists, agree on possible solutions and proposed the way forward. Pertinent matters raised included accreditation of journalists, access to information with government bodies, the need to review outdated laws which govern the media locally, press freedom, among others.

President Ramkalawan commended all members for their enthusiasms in bringing forward the challenges being faced by media in Seychelles. He commended them for their passion for their profession and engagement in finding solutions for the way forward. The President also expressed the Government’s willingness to collaborate with the association to raise the standards of journalism, particularly through the promotion of more ethical practices and balanced reporting.

“I wish to thank the media community and the association under the leadership of Mr Vannier, for the contribution you are all making in society. The media landscape in Seychelles is dynamic, we acknowledge there are challenges but government remains committed in assisting to raise the standards of journalism in the country” said President Ramkalawan.

During discussions, the Head of State also urged journalists to report on well researched topics and to at all times ensure their impartiality through balanced reporting which will in return guarantee information being conveyed to the public is credible.

All points raised have been duly noted by President Ramkalawan and Vice- President Afif for further consideration with follow up actions to be taken where necessary.

In an interview with the local press, Mr Vannier described the meeting as one which was fruitful and frank whereby they have been able to voice out their concerns which was well received by the President.