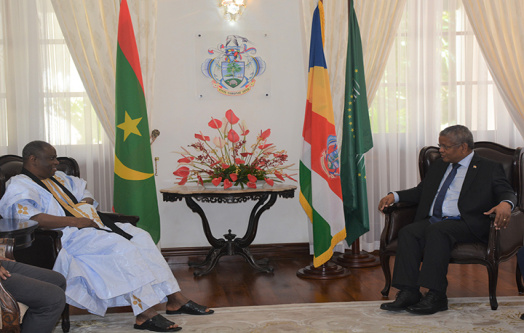 New Ambassador for the Islamic Republic of Mauritania accredited

The new ambassador for the Islamic Republic of Mauritania to the Republic of Seychelles, H.E Ambassador. Jarr Inalla presented his credentials to President Wavel Ramkalawan, at State House yesterday morning.

The President and Ambassador Inalla discussed a wide range of potential areas of cooperation with the view to further strengthen relations between the two countries, for the mutual benefit of both peoples.

Speaking to the local media, Ambassador Inalla stated how honoured he is of having presented his credentials to the President of the Republic of Seychelles today and expressed his fervent hope that this will further enhance cooperation mutually beneficial to both nations. Areas of cooperation discussed included domains such as Tourism, Education, Fisheries and the Blue Economy amongst others.

Seychelles and Mauritania established diplomatic relations on January 10, 1992. H.E. Amb. Inalla is the second Ambassador accredited to Seychelles for Islamic Republic of Mauritania. He was accompanied to