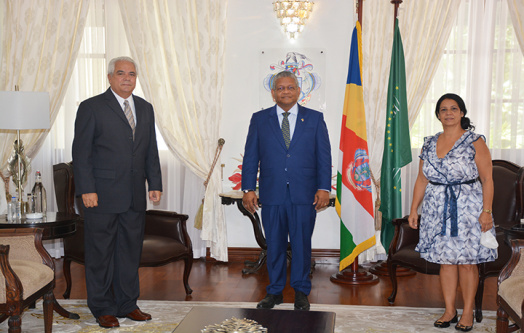 The Resident Ambassador of the Republic of Cuba to the Republic of Seychelles, H.E. Ambassador Juan Humberto Macias Pino paid a farewell call on President Wavel Ramkalawan at State House this morning, as his five year tenure comes to an end.

President Ramkalawan conveyed his sincere appreciation to Ambassador Pino for his efforts in further developing the relationship between Seychelles and Cuba during his tenure. The President further expressed wish that the relationship continues to grow.

“We look forward to closely working with your successor, in the same spirit to further consolidate our relationship. We would equally like to express our gratitude for the role you have played as Dean of the Diplomatic Corps since February 2020. You have played your part very well in uniting the diplomatic community here in Seychelles” said President Ramkalawan.

President Ramkalawan and Ambassador Pino during the meeting took the opportunity to discuss areas of existing cooperation and highlight future subjects of common interest for both countries particularly in the domain of Health, Education, and Sports amongst others.

Speaking to the local media, Ambassador Pino described his time in office as a period of great personal development and will be leaving with fond memories of the islands. He said he is satisfied with the level of cooperation attained during his time as the Cuban Ambassador and expressed hope that this continues to grow.

Also present for the farewell call at State House was the Principal Secretary for Foreign Affairs, Ambassador Vivianne Fock Tave and the Principal Counsellor, MsMyrna Hoareau.