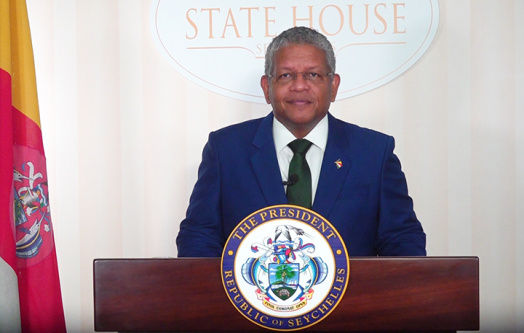 President Wavel Ramkalawan yesterday virtually participated in the Roundtable event held under the theme “Reparations, racial justice and equality for people of African descent” of the high-level meeting of the General Assembly to commemorate the 20th anniversary of the adoption of the Durban Declaration and Programme of Action. The high-level meeting was organized at the level of Heads of States and Governments, in the margins of the 76th Session of the United Nations General Assembly (UNGA).

In his statement, the President remarked how discrimination in its various and insidious forms continues since the adoption of the Durban declaration twenty years ago. He underlined the need for world leaders and ordinary citizens to help in combatting it. President Ramkalawan further highlighted how the Durban Declaration continues to provide an all-inclusive and universal road map to address an end to intolerance, racial and other forms of discrimination and prejudice throughout the world.

“The theme chosen for the twentieth anniversary of the adoption of the Declaration provides us with the opportunity to reflect on the process to achieve a world free from racism and intolerance. Acceptance and recognition of the evils of the past are the fundamental steps to commence the route to forgiveness and healing,” said the President.

The Head of State called on the need for institutional reforms and to provide reparations to victims and their descendants. He noted how Seychelles believes “In the need to pursue justice, and promote inclusion to uphold the dignity and the human rights of all individuals. We are a multi-ethnic country. We trace our origins to Africa, Europe and Asia. Seychelles celebrates her diverse heritage. Our diversity makes the strength of our unity and we do consider our society to be an example to the rest of the world”

To conclude, in the hope to prevent and combat racism and all other forms of discrimination, President Ramkalawan urged all leaders to recommit their efforts and to intensify the political will for real action by implementing the Durban Declaration and Programme of Action.

The Durban Declaration and Programme of Action were adopted in 2001 as an international blueprint against Racism, Racial Discrimination, Xenophobia and Related Intolerance.