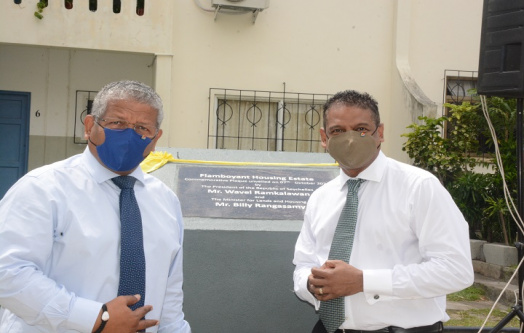 The highlight of the event was the formal unveiling of the commemorative plaque by the President and the Minister for Lands and Housing (MLH), Mr Billy Rangasamy, to officially declare the estate open.

The project was part of the redevelopment of the area and today during the ceremony, applicants allocated to Block B received their keys. Applicants allocated at the Flamboyant Housing Estate were taken from the tenants that had to move out during the construction and were contributing to the housing scheme.

Speaking at the event, Minister Rangasamy said that the opening of the estate come ar an opportune time as it coincides with Habitat week being celebrated on the first Monday of every October worldwide. He underlined that housing and land remains top priority for the Government and where possible his Ministry will consider redevelopment in other areas in other districts. He congratulated the new tenants and encouraged them to take care of their homes and inculcate good practices that will discourage all kinds of social ills.