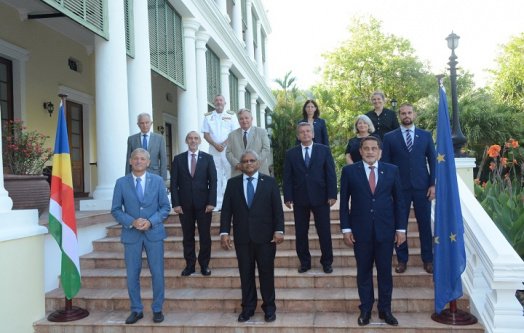 The Ambassador of the European Union (EU) to the Republic of Seychelles, H.E. Mr Vincent Degert accompanied by representatives from eight EU Member States and a delegation of the EU Naval Force – Somalia Operation ATALANTA, paid a courtesy visit to H.E. President Wavel Ramkalawan at State House this afternoon.

The EU delegation is in Seychelles for the 8th Political Dialogue meeting that took place under Article 8 of the Cotonou Agreement. Such dialogue has become customary and key element, whereby the Government of Seychelles has the opportunity to put forward its areas of strategic focus and see ways to further cooperation with the EU.

President Wavel Ramkalawan began by welcoming the delegation to State House and thanked them for the strong partnership that exist between Seychelles and the EU. During the meeting they briefed the President on the intense discussions and how to develop further their collaboration in various areas included climate change, international security threats, governance and human rights, agriculture, fisheries among other sectors.

The President noted how the Government is making it a priority for Seychelles to recover after the COVID-19 pandemic and its willingness to diversify its economy in other sectors rather than being dependable on only tourism. There, he thanked the EU for their continued support and sponsorship to help the country reach its goals.

In respect to maritime security, the Head of State re-affirmed Seychelles’ commitment to play its role alongside strong measures to tackle the scourge of drugs and to further strengthen the collaboration with the EUNAVFOR Operation Atalanta.

On behalf of the delegation, H.E. Mr Vincent Degert, reiterated the support of the EU to work with the Government in those areas. He commanded the President for his leadership role since in office.

At the end of the meeting, both Seychelles and EU reaffirmed their commitment to continue working together, promote common shared values and interests as well as to see proposals discussed materialised.