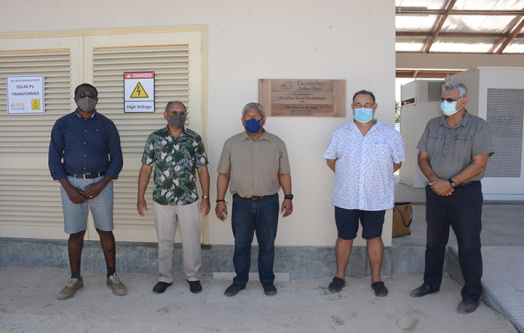 The President of the Republic, Mr Wavel Ramkalawan was the guest of honour at the official launch of the second largest solar plant in Seychelles located on Desroches Island, yesterday morning.

The project is a sustainability initiative by the Islands Development Company (IDC) as part of their green strategy as an alternative to minimise costs, reduce the amount of fuel used to power electricity generators and adopt a renewable green energy source. With the capability to produce a minimum of 2,500 KW, the new solar plant is expected to reduce the island’s dependency on diesel powered generators by 85%.

Furthermore, with the reduction in generator demand, it will decrease diesel consumption by 292,000 gallons per annum, whereby the resort will be able to save 2,000 tons in CO2 production per year, which is equivalent to 241 homes’ energy use for one year.

Speaking on behalf of Governent, Minister for Agriculture, Climate Change and Environment, Mr Flavien Joubert commended IDC, and its team for being steadfast in its efforts to install solar farms on its respective islands, especially in a time when the COVID pandemic has made the cost of business operations very challenging.

In showcasing this milestone achievement by Desroches island, Minister Joubert took the opportunity to launch a challenge to other private islands, both the inner and outer islands, to start the conversation, to exceed a 50% target of renewables in the energy provision, and why not aim for 100% renewable as is the target set for the island of Curieuse.

Also speaking during the ceremony the Chairman of IDC Mr Patrick Berlouis expressed appreciation to IDC management and team for their relentless efforts towards the green energy strategy and made a special call the the Seychelles' Delegation attending COP26 to further the plight of climate change of Small Island Developing States being affected by climate and pollution.

After the ceremony, the presidential delegation was given a tour of the facility where they had an opportunity to view the set up and features of the new Solar Farm.

To note, the IDC has also set up solar farms on other islands such as Farquhar, Astove and Alphonse which are all saving up on fuel consumption and transportation of fuel to the islands.

Present for the inauguration was the First Lady, Mrs Linda Ramkalawan, the Vice-President, Mr Ahmed Afif, Ministers, the Chairperson of the Board of IDC, Mr Patrick Berlouis, the CEO of IDC Mr Glenny Savy, the Deputy CEO of IDC Mr Christian Lionnet and Members of the IDC Board.