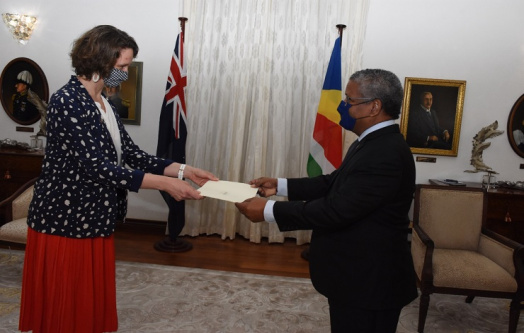 The new High Commissioner of Australia to Seychelles, Dr Kate O’Shaughnessy, presented her credentials to President Wavel Ramkalawan at State House this morning.

The President welcomed and congratulated Dr O’Shaughnessy on her new role and described the ceremony as a stepping stone to further strengthen the excellent relations between Seychelles and Australia.

“Seychelles and Australia share a very good friendship. Our two peoples shares a lot in common and with your accreditation today our two countries takes the excellent bilateral relationship between our two countries to new heights,” said the President.

President Ramkalawan also expressed his appreciation for the various support extended by the Government of Australia in various partnerships that have helped in the development of Seychelles.

President Ramkalawan and High Commissioner O’Shaughnessy discussed avenues for cooperation between the two countries, particularly in the Blue Economy and maritime security as well as sub-region cooperation. On the international arena, they spoke about how the two countries can collaborate further in the upcoming United Nations Climate Change Conference (COP26) especially on the vulnerability of the Small Island Development States (SIDS).

High Commissioner O’Shaughnessy took the opportunity to commend the Government of Seychelles for the leading role it have played for the vaccination programme for the COVID-19 pandemic.

The new High Commissioner for Australia is also responsible for Mauritius, Madagascar, and Comoros and she will be based in Mauritius.