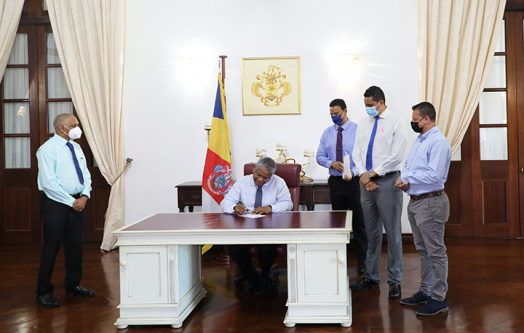 The Act contains 29 amendments, of which one principal amendment was the repeal of Chapter XVIII of the Penal Code which effectively decriminalises defamation.  The charge of defamation can only be pursued as a civil case.

During his statement before assenting to the Penal Code (Amendment) Act 2021, President Ramkalawan said removal of Chapter XVIII in its entirety reflects major strides in the right direction for Seychelles, in the arena of freedom of expression and in providing the right landscape and space for Journalists to practice their profession freely without fear of criminal prosecution.

The President assented to the Act witnessed by the Secretary of State for Cabinet Affairs, Mr Mohammed Afif, the Chairperson of the Media, Youth and Culture Committee in the National Assembly, Hon. Wavel Woodcock and the Chairperson of the Association of Media Practitioners Seychelles (AMPS), Mr Rassin Vannier.