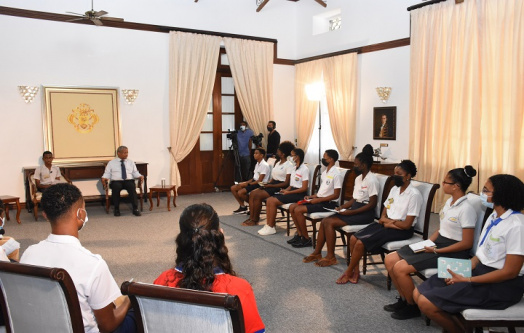 To commemorate the United Nations Universal Children’s Day this year, the Office of the President in collaboration with the National Council for Children (NCC) organized the first ever live 'Presidential Dialogue' with the participation of a group of Seychellois children from different schools on Mahé, Praslin and La Digue.

During the 'Presidential Dialogue', the children had the opportunity to ask the President pertinent questions that they feel are of concern to the youths in different areas such as in education, employment, tourism, culture, sports, social ills affecting the country and the children such as drugs and alcohol, climate change, bullying, security, and robberies, sexual abuse

President Ramkalawan. They also had the opportunity to ask him about his Presidency where he enlightened them on the different aspects and vision of the new administration.

The President hailed the children for voicing out their concerns and for their positive contributions.

“You are the leaders of today, and being here illustrates the exceptional values as well as leadership that you are presently showing in your respective schools. As Seychellois children, you give us hope and the different topics that you have raised are also of concern to the government. I encourage the youths of Seychelles to take their time to grow, learn, and remain focused so that they can reach their goals. You have all our support,” said the President.

President Ramkalawan also thanked everyone involved in making this live event a success, the SBC television and radio, as well as Telesesel for diffusing the live broadcast.

The United Nations’ (UN) Universal Children’s Day, which was established in 1954, is celebrated on November 20th each year to promote international togetherness and awareness among children worldwide. UNICEF, the United Nations Children’s Fund, promotes and coordinates this special day, which also works towards improving children’s welfare.