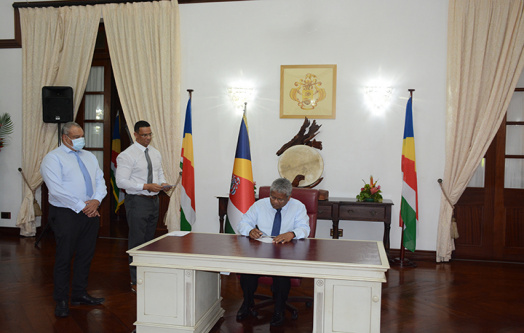 President Wavel Ramkalawan has assented to the Constitution of the Republic of Seychelles (Tenth Amendment) Act 2022 during a ceremony held at State House yesterday afternoon. The National Assembly approved the Bill on 31st May 2022 and yesterday the President Assent to the Bill.

The President assented to the Bill witnessed by the Attorney General, Mr. Frank Ally.

During his statement before assenting to the Constitution of the Republic of Seychelles (Tenth Amendment) Bill, 2022, the President thanked everyone who has been involved in the amendments of this new Bill. Namely, the Seychelles Defence Forces, the Police Force of Seychelles, the Judiciary (both the Supreme Court and the Court of Appeal), the Honourable Leader of the Opposition, the Human Rights Commission, the Ombudsman, the media, the Defence and Security Committee of the National Assembly, the Bar Association of Seychelles and other persons and organizations.

“The military will not be replacing the police force. The military will merely provide support to the police force and other public authorities in dealing with a wide range of issues such as drug trafficking, human trafficking, quarantine, search and rescue, oil spill response measures, hijacking and hostage negotiations. There is no need for the public to be fearful of these amendments. Unlike the 1979 Constitution, the present 1993 Constitution protects the rights and privileges of all Seychellois through the Seychellois Charter of Fundamental Human Rights and Freedom,” said the President.